GiveBack Starts a Rush of Giving

PORT CHESTER, N.Y., Aug. 4, 2011 (SEND2PRESS NEWSWIRE) — Give Back Foundation (www.giveback.org) saw its mission – helping people give more to the causes important to them – fulfilled to a “T” in their recent campaign. During GiveBack.org’s “100 Days of Giving,” members donated to 754 charities, representing the gamut of philanthropy, from neighborhood nonprofits to big global relief efforts, summer camps for special needs children, veterans organizations, pet rescues, environmental action groups, medical research, memorial funds, houses of worship and more. Over $330,000 was donated by its members in 100 days.

“We saw the money go far and wide,” says GiveBack CEO Stephen Paletta. “Whatever a person chooses to support is what GiveBack.org helps them do.” Paletta, winner of Oprah’s Big Give reality show about charitable giving, started GiveBack.org as a way to celebrate everyday philanthropy – average Americans making small donations to make a difference, and to help them give even more.

The campaign, sponsored in part by Visa®, awarded almost $500,000 to people to give to charity. It featured two major prizes. Chris McCoy of Glendale, Arizona, won $50,000, and Giving Circle Fund, a Chinatown New York nonprofit organization, received $10,000 as the contest’s charity category winner. Both McCoy and Giving Circle Fund amassed points by signing up members to GiveBack.org. More than 43,000 people joined during the campaign.

McCoy will divide the $50,000 among various causes. He learned of the contest in its final week and used social media communities to sprint into the lead. While it appeared he had ended the hopes of his chief contender who had networked from the outset in order to acquire a service dog for her autistic son and others, McCoy pledged to make his competitor’s wish come true with a donation to 4 Paws for Ability. Funds are also destined for Doctors Without Borders and Free the Children. For more details, visit: https://www.giveback.org/pages/news/news.aspx?newsid=22 .

Giving Circle Fund will implement the only free after school program in Chinatown’s Public School 2, in September. For more details, visit https://www.giveback.org/pages/news/news.aspx?newsid=14 or http://www.youtube.com/watch?v=TBAp4zGAjao&NR=1 .

GiveBack.org helps people increase their giving through cash back rewards from online shopping. During the campaign, more than 4,300 shopping transactions occurred, generating thousands of dollars for future giving to charity. The site sets up a foundation account online for each member in which to earn as well as save money. GiveBack has also launched a workplace-giving program, called GiveBack@Work, and in September GiveBack.org will begin hosting fundraising campaigns for its members to raise additional funds for their causes.

About GiveBack:
GiveBack was launched by the Give Back Foundation of Port Chester, New York, in November 2010. GiveBack.org helps average Americans increase their giving by establishing an individual foundation account online for each member in which to earn, accumulate and donate money.

News issued by: Give Back Foundation 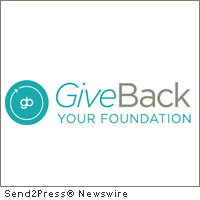 Alternate Headline: 100 Days of Giving: Give Back Foundation and mambers help 754 charities

NEWS ARCHIVE NOTE: this archival news content, issued by the news source via Send2Press Newswire, was originally located in the Send2Press® 2004-2015 2.0 news platform and has been permanently converted/moved (and redirected) into our 3.0 platform. Also note the story “reads” counter (bottom of page) does not include any data prior to Oct. 30, 2016. This press release was originally published/issued: Thu, 04 Aug 2011 08:55:00 +0000

News Source: Give Back Foundation

View Give Back Foundation News Room

More from Give Back Foundation

View Give Back Foundation News Room

ABOUT THE NEWS SOURCE:
Give Back Foundation

RSS News Feed for Give Back Foundation

LEGAL NOTICE AND TERMS OF USE: The content of the above press release was provided by the “news source” Give Back Foundation or authorized agency, who is solely responsible for its accuracy. Send2Press® is the originating wire service for this story and content is Copr. © Give Back Foundation with newswire version Copr. © 2011 Send2Press (a service of Neotrope). All trademarks acknowledged. Information is believed accurate, as provided by news source or authorized agency, however is not guaranteed, and you assume all risk for use of any information found herein/hereupon.