Teen Radio Host Interviews More Than 100 Celebrities in One Year

DAYTONA BEACH, Fla., Aug. 4, 2011 (SEND2PRESS NEWSWIRE) — It all started in front of a coffee shop in Daytona Beach, FL. Pavlina Osta, a 10-year old musician, was playing the steel drums and piqued the interest of a local radio show; this quickly led to a show of her own and to the creation of Pavlina Productions.

Today, at the age of 13, Pavlina says that she “has the best job in the world.”

When Pavlina is not in school, she can be found on location backstage, on tour buses, at blockbuster concerts or swanky hotel lobbies, talking to some of the biggest in the business.

When asked if she ever gets nervous interviewing these celebrities, she says, “No. We sit down and talk. Why be nervous?”

Pavlina adds that, “I ask questions that teens want answers to. I ask them who they look up to and why; I ask them how they overcome personal obstacles. It’s all done in a fun and casual way.”

And, at all times, Pavlina maintains an air of privacy and professionalism; people trust her.

While the majority of her interviews center on music, she has also interviewed sports legends, reality-show winners, television stars and even top politicians.

The radio show, Pavlina’s Kidz Place, is pre-recorded and airs Saturday mornings at 11:30 a.m. ET on WAPN 91.5 out of Holy Hill, FL; on WAPB 91.7 out of Madison, FL; and Pavlina Radio Worldwide can be heard on mobile devices and five Internet radio stations; the list continues to grow.

About Pavlina Osta:
When Pavlina is not on the air or attending Florida public school, she can be found at the Orlando Ballet School or the Joffrey Ballet in New York City; she is a top ballet dancer. Wherever her locale, she is equipped with her MP3 recorder and camera. She knows how to get the attention of the tour manager or record representative for photos and video; she’s a one-girl show.

Pavlina has been featured in numerous publications such as Tiger Beat; Country Weekly; Backstage Pass Magazine; the Orlando Sentinel; Daytona Beach News Journal; and more. Upcoming features include a spotlight in Equanimity magazine at the end of August; and in Faces magazine, a world culture magazine published by Cobblestone, this upcoming October. 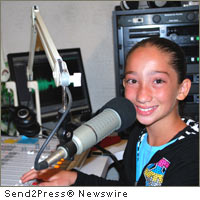 NEWS ARCHIVE NOTE: this archival news content, issued by the news source via Send2Press Newswire, was originally located in the Send2Press® 2004-2015 2.0 news platform and has been permanently converted/moved (and redirected) into our 3.0 platform. Also note the story “reads” counter (bottom of page) does not include any data prior to Oct. 30, 2016. This press release was originally published/issued: Thu, 04 Aug 2011 21:30:45 +0000

ABOUT THE NEWS SOURCE:
Pavlina Productions

LEGAL NOTICE AND TERMS OF USE: The content of the above press release was provided by the “news source” Pavlina Productions or authorized agency, who is solely responsible for its accuracy. Send2Press® is the originating wire service for this story and content is Copr. © Pavlina Productions with newswire version Copr. © 2011 Send2Press (a service of Neotrope). All trademarks acknowledged. Information is believed accurate, as provided by news source or authorized agency, however is not guaranteed, and you assume all risk for use of any information found herein/hereupon.