BELLVUE, Colo., Aug. 10, 2011 (SEND2PRESS NEWSWIRE) — Art lovers from all over the West will gather in a picturesque mountain valley outside Fort Collins, Colorado on Labor Day Sunday. They’re coming in hopes of acquiring original art from over 100 well-known artists that will be auctioned off to the highest bidder under the “Big Top” at the 16th Annual Richard Schmid Fine Art Auction on Sunday, September 4, 2011 (www.RichardSchmidAuction.com).

Over the years the auction has grown from a community affair into a major event in the art world. Last year hundreds of bidders packed the auction tent and took home art that ranged in price from under $1,000 to nearly $40,000.

Have a sharp eye for art? You just might discover an up-and-coming superstar in the silent auction, which features over 80 pieces with opening bids as low as $250. This year the silent auction is introducing an exciting “Buy Now” option that gives patrons an opportunity to scoop up their favorite piece without having to anxiously watch the bid sheet until the close of the auction.

Proceeds from the auction support both the artists and the Rist Canyon Volunteer Fire Department. This year that support means more than ever. In early April, the Crystal Fire, the most devastating and costly fire in Larimer County history, destroyed 13 homes and over 3,000 acres of forest. The profits from this auction directly support the all-volunteer fire department and the safety of the canyon communities it protects, which are spread over more than 100 square miles west of Fort Collins.

You won’t want to miss the opening minutes of the live auction. The first painting to go under the gavel will be local artist Lori Forest’s powerful painting “In the Dead of Night,” which captures the view from her home in Redstone Canyon of what experts have called a catastrophic, once-in-a-lifetime “Perfect Storm” of a wildfire.

Founding artist Richard Schmid wanted to do something extra this year to help, so he has contributed an unprecedented three works for this auction.”My art has become a more powerful tool for good than I ever imagined,” says Schmid. “It gives me great joy to use my talents to help others.” His daughter, artist Molly Schmid, who already has quite a following of her own, is also featured in the auction. 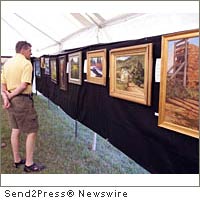 Since its humble beginnings in 1996, over 1,250 pieces of fine original art have been auctioned for a total of more than $1.7 million. View the artwork, meet the artists, and pre-register to bid on the auction’s Web site: http://www.RichardSchmidAuction.com .

The art preview and silent auction opens at 10:00 a.m.; the live auction gets underway promptly at 1:00 p.m. While waiting for the live auction to begin, visitors can enjoy a wide variety of attractions at the Rist Canyon Mountain Festival (also organized by the Rist Canyon Volunteer Fire Dept.), including a huge book sale, craft market, live entertainment and plenty of food. Admission to both the festival and art auctions is free. 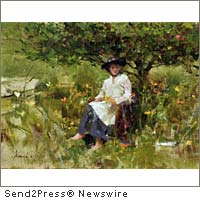 NEWS ARCHIVE NOTE: this archival news content, issued by the news source via Send2Press Newswire, was originally located in the Send2Press® 2004-2015 2.0 news platform and has been permanently converted/moved (and redirected) into our 3.0 platform. Also note the story “reads” counter (bottom of page) does not include any data prior to Oct. 30, 2016. This press release was originally published/issued: Wed, 10 Aug 2011 08:57:11 +0000

LEGAL NOTICE AND TERMS OF USE: The content of the above press release was provided by the “news source” Richard Schmid Fine Art Auction or authorized agency, who is solely responsible for its accuracy. Send2Press® is the originating wire service for this story and content is Copr. © Richard Schmid Fine Art Auction with newswire version Copr. © 2011 Send2Press (a service of Neotrope). All trademarks acknowledged. Information is believed accurate, as provided by news source or authorized agency, however is not guaranteed, and you assume all risk for use of any information found herein/hereupon.