“Tickets are now on sale for the festival which will be held at The Grand Oaks Resort, a 400-acre premier equine-inspired resort located at 3000 Marion County Rd. in Weirsdale, between Orlando and Ocala just off US Hwy. 441/27,” said Ted Williams, Vice President of the Alliance Healthcare Foundation, a not-for-profit Foundation which provides philanthropic support for Leesburg Regional Medical Center and The Villages Health System.

Visit The Grand Oaks website at www.thegrandoaks.com for tickets, information and directions to the resort. Admission starts at $35 for lawn seating, $60 for general admission seating and $125 for preferred seating. All major credit cards are accepted. Gates open the day of the event at 10 a.m. and The Judds are scheduled to perform at 3 p.m.

Admission to the festival will include The Judds and other entertainment and events including opening acts Rob Nichols, Norman Lee, The Calhouns and Donna Moore

Naomi and Wynonna, who have won over 60 industry awards – including five Grammy Awards – will sing classic breakout hits including “Mama, He’s Crazy,” “Why Not Me,” “Love Can Build a Bridge,” “Girls Night Out,” and “Grandpa (Tell Me ‘Bout the Good Old Days).” Wynonna will also perform some of her biggest hits.

Mother and daughter enjoyed an astounding run of 14 number one singles from 1984 to 1989, ranking them as one of the most popular country acts of the ’80s – a legacy which endures, today.

After winning the CMA’s Vocal Group/Duo of the Year Award every year from 1985 to 1991, Naomi and Wynonna were forced to split when Naomi was diagnosed with a chronic illness that nearly took her life and led to her retirement from touring with her daughter. Through the years, her condition has improved and she’s been able to reunite with her daughter on occasion. Today, Naomi says, “I am the healthiest, happiest and most fit I’ve ever been.”

The Last Encore Tour kicked off in November 2010.

About The Alliance Healthcare Foundation:
Alliance Healthcare Foundation (http://cfhalliance.org/giving_overview.htm) is a not-for-profit Foundation which provides philanthropic support for Leesburg Regional Medical Center and The Villages Health System. Our mission is to enhance the quality of healthcare in the communities we serve by securing financial support and enlisting people to make a commitment to our hospitals as their primary hospitals of choice. We are committed to building community awareness through leadership and donor engagement. 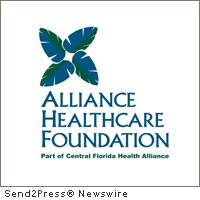 NEWS ARCHIVE NOTE: this archival news content, issued by the news source via Send2Press Newswire, was originally located in the Send2Press® 2004-2015 2.0 news platform and has been permanently converted/moved (and redirected) into our 3.0 platform. Also note the story “reads” counter (bottom of page) does not include any data prior to Oct. 30, 2016. This press release was originally published/issued: Mon, 15 Aug 2011 20:57:25 +0000

LEGAL NOTICE AND TERMS OF USE: The content of the above press release was provided by the “news source” Alliance Healthcare Foundation or authorized agency, who is solely responsible for its accuracy. Send2Press® is the originating wire service for this story and content is Copr. © Alliance Healthcare Foundation with newswire version Copr. © 2011 Send2Press (a service of Neotrope). All trademarks acknowledged. Information is believed accurate, as provided by news source or authorized agency, however is not guaranteed, and you assume all risk for use of any information found herein/hereupon.