FARMINGTON, N.M., Aug. 16, 2011 (SEND2PRESS NEWSWIRE) — Each Labor Day Weekend Native American craftsmen meet near the confluence of the Animas, La Plata and San Juan Rivers in Farmington, N.M. for the Totah Festival. “We gather for friendship,” says George Francis, Totah Festival Foundation Board President, “and we come to sell arts and crafts before the winter comes to the Four Corners.” Farmington, a Four Corners center of trade, lies in a river valley which the Navajos once called Totah, “the place where rivers meet.”

The Totah Festival is a Native American fine arts and crafts show and marketplace with an authentic Indian rug auction, and displays of the best work of more than 100 artisans from the Four Corners. A contest pow-wow is held on the front lawn of the Farmington Civic Center. Many of the artisans demonstrate their skills for the crowd which numbers 10,000 over the two days. The September festival has drawn native weavers, sculptors, jewelers, potters and carvers to Farmington for over two decades.

Farmington has long been a focal point for trading Southwestern Indian wares. It’s a place where collectors and admirers of authentic Indian crafts go to find fine goods at affordable prices from emerging artists.

“Because we want to get the word out to buyers from around the country about Totah, this year we have produced a film that catches the flavor of this colorful festival,” explains Debbie Dusenbery, Executive Director of the Farmington Convention and Visitors Bureau. See it here http://totahfestival.farmingtonnm.org . Dusenbery also sits the board Totah Festival Foundation.

The Totah Festival this year opens on Saturday, September 3, from 10 a.m. to 7 p.m. at the Farmington Civic Center, 200 W. Arrington in Farmington’s historic downtown. It continues on Sunday from 11 a.m. to 5 p.m. The picturesque Pow Wow on the Civic Center lawn continues until 6 p.m. on Sunday.

More information about this region’s native craftsman, trading posts, galleries and special events can be found through the Farmington Convention and Visitors Bureau at http://www.farmingtonnm.org or call 800-448-1240, for questions about accommodations and the many things to see and do in the Four Corners area. 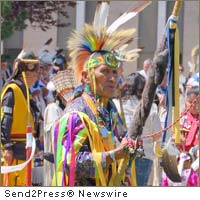 NEWS ARCHIVE NOTE: this archival news content, issued by the news source via Send2Press Newswire, was originally located in the Send2Press® 2004-2015 2.0 news platform and has been permanently converted/moved (and redirected) into our 3.0 platform. Also note the story “reads” counter (bottom of page) does not include any data prior to Oct. 30, 2016. This press release was originally published/issued: Tue, 16 Aug 2011 20:19:41 +0000

LEGAL NOTICE AND TERMS OF USE: The content of the above press release was provided by the “news source” Totah Festival Foundation or authorized agency, who is solely responsible for its accuracy. Send2Press® is the originating wire service for this story and content is Copr. © Totah Festival Foundation with newswire version Copr. © 2011 Send2Press (a service of Neotrope). All trademarks acknowledged. Information is believed accurate, as provided by news source or authorized agency, however is not guaranteed, and you assume all risk for use of any information found herein/hereupon.