AUSTIN, Texas, Aug. 18, 2011 (SEND2PRESS NEWSWIRE) — According to Dr. William Griffith, a recently published article in the Journal of Applied Physics announces the discovery of a new electro-magnetic wave technology – tentatively referred to as “3D TAP,” created by Dr. Griffith – that could dramatically change the way we understand the world around us.

This wave technology, which exploits microwaves in a way previously un-seen in science, works by producing “magneto-static spin waves” into open space and analyzing how those waves are affected by the materials they come into contact with.

For those familiar with the spectrograph commonly used in astronomy – which determines the elemental make-up of celestial objects based on how those objects affect light passing through them – this is not an entirely unfamiliar concept. In fact there are a number of devices already in use that work in similar ways in a variety of fields. What makes this new technology so special is its ability to analyze a sample immediately and without interfering with it at all.

As Dr. William Griffith, the creator of this technology, explains, “Transmitted electromagnetic waves will respond to electric or magnetic fields. Such fields are typical within most materials and are caused by how the atoms and molecules are structured. Changes within the transmitted electromagnetic spin wave as it moves through the material are recorded and used to identify specific material, chemical, and physical properties – without ever tampering with that initial sample.”

Classic Sci-Fi fans might immediately recognize the applications of this technology. While current non-invasive medical devices might require a thin tissue – say, an earlobe – to send waves through and determine vital signs, this technology introduces the ability to scan immediately, non-invasively, and anywhere on the body a physician might want. With proper R&D, this new technology may one day in the near future be combined with smart-phones to create scanners capable of analyzing vital-signs – or maybe anything else around us – with a quick point of the phone.

This technology can be applied within nearly any analytical process requiring identification of chemical and physical properties – industrial applications include extremely rapid analysis of process intermediates or products, medical applications include non-invasive chemical profiling of fluids and tissues, and a range of industry-specific applications also apply to address needs within research, defense, and other fields.

For more information regarding individual or corporate sponsorship opportunities and technology specifics, contact Dr. Griffith by email directly. Please be sure to include relevant background information on yourself and/or your organization. Benefactor anonymity and privacy are assured. No information about respondents will be divulged without their permission. 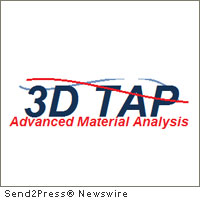 NEWS ARCHIVE NOTE: this archival news content, issued by the news source via Send2Press Newswire, was originally located in the Send2Press® 2004-2015 2.0 news platform and has been permanently converted/moved (and redirected) into our 3.0 platform. Also note the story “reads” counter (bottom of page) does not include any data prior to Oct. 30, 2016. This press release was originally published/issued: Thu, 18 Aug 2011 18:29:55 +0000

LEGAL NOTICE AND TERMS OF USE: The content of the above press release was provided by the “news source” Dr. William Griffith or authorized agency, who is solely responsible for its accuracy. Send2Press® is the originating wire service for this story and content is Copr. © Dr. William Griffith with newswire version Copr. © 2011 Send2Press (a service of Neotrope). All trademarks acknowledged. Information is believed accurate, as provided by news source or authorized agency, however is not guaranteed, and you assume all risk for use of any information found herein/hereupon.