LOS ANGELES, Calif., Aug. 22, 2011 (SEND2PRESS NEWSWIRE) — “Author Everette O. Lemons has taken the hit television series ‘I Dream of Jeannie’ and resurrected it, giving it fresh literary life. ‘Jeannie-Centristasis’ (ISBN: 978-0-557-19140-6; Lulu Press) is just as much fun as the Jeannie who once frolicked across America’s television screens,” says Randall R. Radic, The US Review of Books.

It goes without saying that the 1960s television sitcom “I Dream of Jeannie,” (Produced by Sidney Sheldon in association with Screen Gems circa 1964) has become one of the most endearing comedic, yet philosophically controversial television series ever. Yet amidst the comedy, which was primarily drawn from the antics of a beautiful, charming, and impetuous female Djinn, and moreover the often times perceived to be social improprieties between two unwed members of the opposite sex, there exists nevertheless a vital philosophical and moral lesson that it conveys.

A lesson that begins with the simple notion of human desire, and transcends itself into universally defining Good and Evil. But in this age of the intellectual trap called modernity, I felt that it would be a rather moot point in attempting to convey such a philosophically driven theme in a setting of nearly 50 years in the past. Thus, the revered charming character Jeannie, along with those characters that have always been associated with her are ushered into the year 2011, and in a dramatic fashion.

It is late summer of 2011, and Jeannie has waited the mandatory 20 years to perform the miraculous feat of resurrecting her former husband and master as well as three others that have been dead since 1991. But in return for such miraculous power and being crowned a Great Djinn, Jeannie has had to accept responsibility for a nebulous concept even she does not fully understand. But the incentive to accept such a responsibility and pledging the sacrifice of her own son should she fail has been encompassed by the need to be reunited with those she loves. She is to quickly form a formidable team consisting of members from diverse backgrounds and ideals that must pledge allegiance to a philosophical doctrine the Elders call Centristasis. Each member of the Centristasis brings to the group a high level of expertise and experience within varying fields, and the fusion of such a team the Elders deem critical.

The Centristasis group must confront every situation that is presented to it in a manner consistent with a certain philosophical doctrine, irrespective of government laws and regulations. To do this, Jeannie must acquire the help of two Grand Wizards who are to guide her philosophically within her responsibility. But events occur quickly, as those Jeannie resurrects are promptly kidnapped by government authorities, and authorities Jeannie must not only confront, but likewise ally with. This leads to the murder of an innocent Korean national, the identity of whom forces Jeannie and the Centristasis to travel over 40 years into the past in search of answers.

In the end, Jeannie must accept the assistance of another Great Djinn in her quest to learn the gruesome details of the past in order to prevent a worldwide catastrophe in the present. Emotionally riveting, thrilling, with comedy and romance to boot, Critical Fusion becomes the first step of the Centristasis.

Book is also available in the following eReader formats: Kindle, Nook and eBook. Coming soon to the Apple iBookstore. 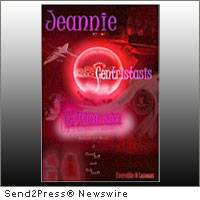 NEWS ARCHIVE NOTE: this archival news content, issued by the news source via Send2Press Newswire, was originally located in the Send2Press® 2004-2015 2.0 news platform and has been permanently converted/moved (and redirected) into our 3.0 platform. Also note the story “reads” counter (bottom of page) does not include any data prior to Oct. 30, 2016. This press release was originally published/issued: Mon, 22 Aug 2011 18:58:47 +0000

I Dream of Jeannie

LEGAL NOTICE AND TERMS OF USE: The content of the above press release was provided by the “news source” Everette O. Lemons or authorized agency, who is solely responsible for its accuracy. Send2Press® is the originating wire service for this story and content is Copr. © Everette O. Lemons with newswire version Copr. © 2011 Send2Press (a service of Neotrope). All trademarks acknowledged. Information is believed accurate, as provided by news source or authorized agency, however is not guaranteed, and you assume all risk for use of any information found herein/hereupon.