SANTA CLARITA, Calif., Aug. 23, 2011 (SEND2PRESS NEWSWIRE) — The Santa Clarita Valley Constitution Day Foundation has been diligently working to plan and execute its first big constitution day celebration. It will be held on September 17 from 10:00 a.m. to 4:00 p.m. at West Creek Community Park. Admission is free.

It was on September 17, 1787 that the U.S. Constitution was first signed by 39 brave men who changed the course of history.

“This is an event that should be recognized and celebrated,” says Alice Khosravy, founder of the Santa Clarita Valley Constitution Day Foundation. “After talking with other interested citizens, we decided it was time to organize a festival that would serve a dual purpose – education and fun.”

Geared to families with children in kindergarten through eighth grade, this event will take attendees back in time. Festival goers will get to meet their founding fathers and mothers; visit 13 colonial states; experience a reenactment of the signing of the U.S. Constitution; play games and walk through a historical colonial village; and enjoy great speakers, colonial music, food and more.

The participants will breathe new life into the signing of the U.S. Constitution through creative storytelling techniques as they take on the role of delegates and sign their own weathered copies of the U.S. Constitution. And, the Los Angeles Fifes and Drums will set the stage with its patriotic colonial music and historical roots; the group dates back to 1905. These talented musicians play on rope-tensioned drums handcrafted by their members, and Healy Flute Co. Deluxe Model 10-hole B-flat fifes.

And to add to the non-stop action, the Morgan Rifle Company will present a true picture of what it was like during the Revolutionary War – the clothes they wore and the weapons and equipment carried.

“The event is non-political and our goal is to simply provide our community with a fun day in the sun while teaching them a bit about our nation’s history to boot,” explains Khosravy.

To register for this free, family-friendly event, visit: www.scvconstitutionday.org . 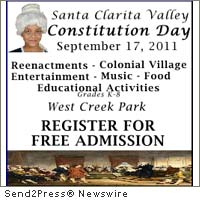 NEWS ARCHIVE NOTE: this archival news content, issued by the news source via Send2Press Newswire, was originally located in the Send2Press® 2004-2015 2.0 news platform and has been permanently converted/moved (and redirected) into our 3.0 platform. Also note the story “reads” counter (bottom of page) does not include any data prior to Oct. 30, 2016. This press release was originally published/issued: Tue, 23 Aug 2011 09:59:11 +0000

signing of US Constitution

LEGAL NOTICE AND TERMS OF USE: The content of the above press release was provided by the “news source” SCV Constitution Day Foundation or authorized agency, who is solely responsible for its accuracy. Send2Press® is the originating wire service for this story and content is Copr. © SCV Constitution Day Foundation with newswire version Copr. © 2011 Send2Press (a service of Neotrope). All trademarks acknowledged. Information is believed accurate, as provided by news source or authorized agency, however is not guaranteed, and you assume all risk for use of any information found herein/hereupon.