Big Bay Brewing Co. Rolls Out Its Next Wave of Craft Beers with the Launch of Long Weekend India Pale Ale

MILWAUKEE, Wis., Aug. 30, 2011 (SEND2PRESS NEWSWIRE) — In celebration of Labor Day, the last official long weekend of summer, Big Bay Brewing Co.® has introduced its Long Weekend India Pale Ale (IPA). The IPA style brew is the first of a series of limited edition beers to be introduced by the Shorewood, Wisconsin-based craft brewer.

“The IPA style is a popular craft beer with a strong hop aroma and flavor that complements the lushness of the late summer season. It’s a great beer to savor on those final long afternoons on the lake or warm evenings on the deck,” said Jeff Garwood, Big Bay Brewing Co. co-founder and managing partner.

Big Bay Brewing’s Long Weekend IPA gives a nod to the original heavily hopped English style ale with a nice spicy and floral hop flavor and aroma, balanced with a good malt back bone. The result is a balanced and enjoyable IPA.

IPAs have a rich history dating back to the 18th Century when British colonists needed to ensure that their beer would stay fresh and unspoiled during their long voyages from England to India. Brewers added extra hops and more fermented malt to their ales to prevent spoilage on the journey and to withstand the warmer climates of India. The new style was embraced and came to be known as India Pale Ale.

The introduction of Long Weekend IPA marks Big Bay Brewing’s first limited edition brew. It will be available into the fall at which time the brewer will roll out its next limited edition style – a porter.

“Craft beer drinkers are interested in exploring new flavor profiles, and with our limited edition beers we’ll be able to deliver a greater variety of beer styles to meet the unique demands of our craft beer consumers throughout the year,” said Garwood.

The original test brew of Long Weekend IPA has been available for sampling at the Big Bay Brewing Co.’s Tasting Room and Retail Center, located at 4517 N. Oakland Ave. in Shorewood, Wis., for several weeks and has received positive feedback from tasting room visitors.

Developed from unique and exclusive recipes that feature proprietary yeast and the highest quality ingredients, Big Bay Brewing beers offer the distinctiveness of Wisconsin’s microbrews with a clean finish. They’re brewed slowly and methodically resulting in a well-balanced, robust, drinking experience. The company has an alternating proprietorship with the Milwaukee Brewing Company, which leases space, brewing time and equipment to Big Bay Brewing Co. 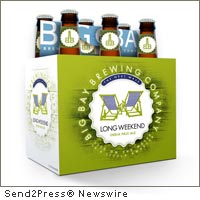 NEWS ARCHIVE NOTE: this archival news content, issued by the news source via Send2Press Newswire, was originally located in the Send2Press® 2004-2015 2.0 news platform and has been permanently converted/moved (and redirected) into our 3.0 platform. Also note the story “reads” counter (bottom of page) does not include any data prior to Oct. 30, 2016. This press release was originally published/issued: Tue, 30 Aug 2011 17:48:32 +0000

LEGAL NOTICE AND TERMS OF USE: The content of the above press release was provided by the “news source” Big Bay Brewing Company or authorized agency, who is solely responsible for its accuracy. Send2Press® is the originating wire service for this story and content is Copr. © Big Bay Brewing Company with newswire version Copr. © 2011 Send2Press (a service of Neotrope). All trademarks acknowledged. Information is believed accurate, as provided by news source or authorized agency, however is not guaranteed, and you assume all risk for use of any information found herein/hereupon.