“Sand Pail City” tells the story of what was once a small and quaint Florida fishing village, until its mayor, Marshall Brickman, turned it into a sprawling strand of pricy, high-rise condominiums and upscale shops in the 1980s.

At the center of the story is Dusty Johnson, a young man who bears a striking resemblance to Bill Holly, an outspoken community leader and fisherman who diligently fought to stop Brickman’s entrepreneurial conquests. Holly was mysteriously killed in a boat fire and many citizens secretly blamed Brickman’s “mafia-esque” partners.

Dusty’s girlfriend has been hired by a local school, so the couple relocates to Sand Pail City. As people meet him, they begin to believe that he is the long-lost son of Holly. As a result, a series of events unfolds, thrusting Brickman against his partners and hostile locals.

Brickman desperately attempts to redeem himself by taking Dusty under his wing. However, he cannot stop his dreams and aspirations from unraveling before his eyes.

She says that, “The characters are not just one-dimensional heroes or villains. Printz expertly creates a unique town and citizens without making the village or its citizens fall victim to tired tropes. With a well-paced plot and meticulously punctuated text, readers will enjoy the trip to ‘Sand Pail City.'”

News issued by: Out In Left Publishing 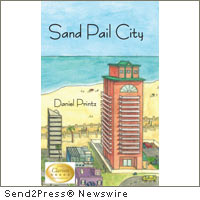 NEWS ARCHIVE NOTE: this archival news content, issued by the news source via Send2Press Newswire, was originally located in the Send2Press® 2004-2015 2.0 news platform and has been permanently converted/moved (and redirected) into our 3.0 platform. Also note the story “reads” counter (bottom of page) does not include any data prior to Oct. 30, 2016. This press release was originally published/issued: Fri, 09 Sep 2011 17:51:53 +0000

News Source: Out in Left Publishing

More from Out in Left Publishing

ABOUT THE NEWS SOURCE:
Out in Left Publishing

RSS News Feed for Out in Left Publishing

LEGAL NOTICE AND TERMS OF USE: The content of the above press release was provided by the “news source” Out in Left Publishing or authorized agency, who is solely responsible for its accuracy. Send2Press® is the originating wire service for this story and content is Copr. © Out in Left Publishing with newswire version Copr. © 2011 Send2Press (a service of Neotrope). All trademarks acknowledged. Information is believed accurate, as provided by news source or authorized agency, however is not guaranteed, and you assume all risk for use of any information found herein/hereupon.