MEXICO, Mo., Sept. 20, 2011 (SEND2PRESS NEWSWIRE) — Missouri Gov. Jay Nixon, whose job-creation strategy has focused on investing in science, technology and innovation, and encouraging and incentivizing entrepreneurship, selected Soy Labs (www.SoyLabs.com) and the Missouri Plant Science Center (www.mopsc.org) on Friday, as the site to discuss the importance of the Missouri House passing the Missouri Science and Innovation Reinvestment Act (MOSIRA) as part of the Made in Missouri Jobs Package.

The Missouri Senate overwhelmingly passed the Made in Missouri Jobs Package with a strong, bipartisan vote on Wednesday, September 14.

Soy Labs, LLC, the premier ingredient supplier delivering high-quality soy ingredients to leading health supplement formulators and manufacturers in the nutrition industry, and managing tenant of the Missouri Plant Science Center (MPSC), is seen for its technological and entrepreneurial thinking that is positioned to spur innovation and economic development in Missouri.

While touring the facility with Ryan Schmidt, Soy Labs president and other Soy Labs executives, Nixon discussed how MOSIRA and the Made in Missouri Jobs Package will create jobs while ensuring continued fiscal discipline and accountability with taxpayer resources.

“By embracing technology and showing the partnership between higher education, technology and entrepreneurship, it clearly will give us the capacity for the long term future,” Nixon said.

Soy Labs relocated from Fairfield, CA, last year, to be the managing tenant of the Missouri Plant Science Center, which is a joint venture of the Missouri Technology Corporation (MTC), the University of Missouri System and the city of Mexico, Mo.

The 25,000 square-foot Missouri Plant Science Center is a shared-use facility where researchers work alongside business and industry experts in a multi-disciplinary environment. The center facilitates the collaboration between scientific and entrepreneurial minds to turn the latest research into functional real-world applications and consumer goods.

“Reliv’s partnership with Soy Labs is an outgrowth of those efforts in the areas of nutritional science and technology. Our partnership will give Reliv the most advanced and effective soy ingredients on the market,” Montgomery added.

Soy Labs partnering institutions have received research funding from the National Institutes of Health, the U.S. Department of Defense, the American Institute for Cancer Research, and the Biotechnology and Biological Sciences Research Council as well as other organizations.

As one of the key pillars of the Made in Missouri Jobs Package, MOSIRA would create a funding source to spark growth in research and technology enterprises by capturing a small percentage of the growth in state revenue over a base year from a designated group of Missouri science and innovation companies.

The Missouri Technology Corporation will administer the MOSIRA funds. MTC will reinvest the MOSIRA funding through loans and other means to generate further economic growth in the science and innovation industry sectors, with emphasis on biotechnology and life sciences. Funding will be reinvested in a wide range of programs designed to create jobs, nurture start-ups, and bring science and technology companies to the state.

“Here in Missouri, we must keep our economy moving forward by embracing science and technology and investing in research and development,” said Nixon.

– Photo Caption: Ryan Schmidt (left), president of Soy Labs, discusses current innovation at the Missouri Plant Science Center with Missouri’s Gov. Jay Nixon during the governor’s visit to discuss the importance of the Missouri House passing the Missouri Science and Innovation Reinvestment Act as part of the Made in Missouri Jobs Package. 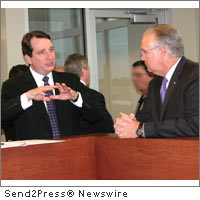 NEWS ARCHIVE NOTE: this archival news content, issued by the news source via Send2Press Newswire, was originally located in the Send2Press® 2004-2015 2.0 news platform and has been permanently converted/moved (and redirected) into our 3.0 platform. Also note the story “reads” counter (bottom of page) does not include any data prior to Oct. 30, 2016. This press release was originally published/issued: Tue, 20 Sep 2011 06:59:33 +0000

Made in Missouri Jobs Package

LEGAL NOTICE AND TERMS OF USE: The content of the above press release was provided by the “news source” Soy Labs, LLC or authorized agency, who is solely responsible for its accuracy. Send2Press® is the originating wire service for this story and content is Copr. © Soy Labs, LLC with newswire version Copr. © 2011 Send2Press (a service of Neotrope). All trademarks acknowledged. Information is believed accurate, as provided by news source or authorized agency, however is not guaranteed, and you assume all risk for use of any information found herein/hereupon.