Highlighted by a 15-block parade, live entertainment and speeches from members of the Muslim community, the parade will start at 37th Street and Madison Avenue in Manhattan and proceed downtown to 23rd Street for the live show, bazaar and a variety of ethnic foods. International TV distributor SoundView Broadcasting of Long Island City, NY will televise the entire event throughout America via Bridges TV on Verizon FIOS, Comcast, Time Warner Cable, Buckeye, Cox and Selco.

Grand Marshals for this year’s parade will be Ilyasah Shabazz, daughter of Malcolm Shabazz, and Imam Souleimane Konate, Secretary General of the Council of African Imams. The theme for the 2011 event is “Proud to be a Muslim-American.”

About The Muslim Foundation of America:
For twenty-five years, the non-profit Muslim Foundation of America (MFA), has organized the United American Muslim Day Parade in Manhattan on the last Sunday of September. Each year, the parade has grown in scope and significance, fulfilling its stated purpose of celebrating pride in a shared Muslim heritage, bringing together all ethnic and religious groups to promote a clearer understanding of Islam and establish interfaith cooperation between all Muslims and other religious and community groups.

About Bridges TV:
Bridges TV is an established American multi-ethnic English-language TV channel offering a broad range of lifestyle programming aimed at fostering greater understanding between all religions and cultures. The channel has come under new ownership, having recently been acquired by SoundView Broadcasting. SoundView is a provider of media and broadcast services for over 25 international television channels from India, Pakistan, Bangladesh, Africa, Egypt and the US to audiences in the United States, Canada, Europe and the UK. 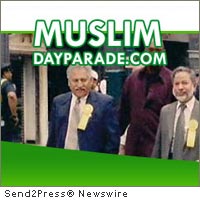 NEWS ARCHIVE NOTE: this archival news content, issued by the news source via Send2Press Newswire, was originally located in the Send2Press® 2004-2015 2.0 news platform and has been permanently converted/moved (and redirected) into our 3.0 platform. Also note the story “reads” counter (bottom of page) does not include any data prior to Oct. 30, 2016. This press release was originally published/issued: Wed, 21 Sep 2011 19:21:06 +0000

ABOUT THE NEWS SOURCE:
Bridges TV

LEGAL NOTICE AND TERMS OF USE: The content of the above press release was provided by the “news source” Bridges TV or authorized agency, who is solely responsible for its accuracy. Send2Press® is the originating wire service for this story and content is Copr. © Bridges TV with newswire version Copr. © 2011 Send2Press (a service of Neotrope). All trademarks acknowledged. Information is believed accurate, as provided by news source or authorized agency, however is not guaranteed, and you assume all risk for use of any information found herein/hereupon.