PHILADELPHIA, Pa., Sept. 26, 2011 (SEND2PRESS NEWSWIRE) — The Energy Cooperative, a member-owned nonprofit, announced today the official launch of Clean Heat, an initiative to educate and encourage consumers to use Bioheat – a blend of biodiesel and standard heating oil. Since the original creation of the initiative in February 2011, 1,000 additional members signed on to use Bioheat, bringing total member carbon dioxide reductions to over 1 million pounds in 2011. This is the equivalent of the emissions produced by a car driving 41 times around the earth.

This initiative comes at a time when oil prices are at historic highs. Oil prices are $1.00 higher than they were this time last year. With the volatility of the oil market, members of The Energy Co-op purchasing either Bioheat or standard heating oil can take advantage of the fixed margins negotiated by the Heating Oil Program staff. This past heating season, members saved an average of $0.25 per gallon compared to the state retail average.

Along with being competitively priced, Bioheat offers many advantages to the heating oil consumer. It is produced domestically, which supports local jobs and reduces America’s dependence on foreign oil. Additionally, Bioheat reduces air emissions like carbon monoxide, particulates, and smog forming compounds, improving the air quality around the home. Finally, no additional modifications are required for existing oil burners or tanks. Users purchasing standard heating oil can switch to Bioheat on their next delivery.

To kick off the Clean Heat initiative, The Energy Co-op launched a Clean Heat video contest. Members compete by submitting videos sharing their experience using Bioheat. The Energy Co-op will use the member videos as a way to promote use of the product and create general awareness of this alternative fuel by connecting potential users to current users. The contest will conclude on October 20, 2011.

“Bioheat is an excellent way to heat your home and protect the environment. Best of all, through The Energy Cooperative, members can have access to this premium product at a competitive price,” stated Krystal Eason, Marketing Coordinator for The Energy Co-op.

Members of The Energy Co-op agree. Kathy Bernardin of Pottstown, PA uses a 5 percent blend level of biodiesel to heat her home and commented that the organization “provides trusted guidance to those that care about the environment while providing a cost savings.”

After discovering members lacked awareness or knowledge of Bioheat despite the fact that The Energy Co-op has been offering it to members since 2006, Clean Heat was developed as a way for the organization to educate their members on what Bioheat is, where it comes from and how they could benefit from it.

For consumers interested in becoming a member of The Energy Cooperative and switching to Bioheat, visit their website at www.TheEnergy.Coop or call 215-413-2122. Additional information on Bioheat and their Clean Heat initiative can be found at http://www.theenergy.coop/Heating_Oil/heatingoil_cleanheat.htm .

News issued by: The Energy Cooperative 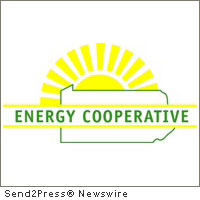 Alternate Headline: The Energy Cooperative announced today the official launch of Clean Heat, an initiative to educate and encourage consumers to use Bioheat

NEWS ARCHIVE NOTE: this archival news content, issued by the news source via Send2Press Newswire, was originally located in the Send2Press® 2004-2015 2.0 news platform and has been permanently converted/moved (and redirected) into our 3.0 platform. Also note the story “reads” counter (bottom of page) does not include any data prior to Oct. 30, 2016. This press release was originally published/issued: Mon, 26 Sep 2011 19:34:31 +0000

More from The Energy Cooperative

ABOUT THE NEWS SOURCE:
The Energy Cooperative

LEGAL NOTICE AND TERMS OF USE: The content of the above press release was provided by the “news source” The Energy Cooperative or authorized agency, who is solely responsible for its accuracy. Send2Press® is the originating wire service for this story and content is Copr. © The Energy Cooperative with newswire version Copr. © 2011 Send2Press (a service of Neotrope). All trademarks acknowledged. Information is believed accurate, as provided by news source or authorized agency, however is not guaranteed, and you assume all risk for use of any information found herein/hereupon.