“This is a bold step, but it’s not surprising. As a representative of the nation’s third largest dairy producing district, and as a co-chair of the Congressional Dairy Caucus in the U.S. House of Representatives, Rep. Simpson understands the challenges. He knows what it takes to safeguard the economic well-being of the dairy industry in Idaho and across the U.S.,” says Mike Roth, dairy producer President of IDA.

Last March, Idaho dairy producers voted to recommend a dramatic reform package – Foundation for the Future (FFTF) – which served as the model for the Dairy Security Act of 2011. During that vote, 86 percent of Idaho’s dairy producers were represented. FFTF is an effort spearheaded by dairy producers and cooperative members of the National Milk Producers Federation.

“Rep. Simpson is a longtime advocate for business growth and Idaho’s livestock agriculture. He knows a new dairy policy is needed to help manage price volatility, create safety nets and move the dairy industry in a positive and economically sound direction,” says Roth. “During the 2008 crisis, when milk prices collapsed and export markets declined, many dairy operations left the business. Today we are facing elevated feed cost coupled with declining milk prices creating the dynamics where many Idaho dairy families are facing dire situations. Congressman Simpson knows that there is no future in dairies operating under current government dairy policies, status quo is not a viable option.”

The new bill promotes, and in some areas, expands components of the dairy industry plan. Like FFTF, the Dairy Security Act includes a voluntary margin insurance program and a Dairy Market Stabilization Program, which work together to encourage lower milk production during periods of declining market demand and low margins.

IDA calls on the nation’s dairy producers to rally their support behind Dairy Security Act of 2011. “I urge fellow Idaho dairy producers to attend the upcoming IDA Annual Meeting in Boise on Nov. 9-10, to learn more about this bill and other issues affecting this state and national dairy industry,” says Roth.

The Idaho Dairymen’s Association (IDA), based in Twin Falls, ID, was established to continue to develop and sustain an economically viable Idaho dairy industry that works together to achieve success in the domestic and global marketplace in meeting the needs of the Idaho dairy farm families. Founded in 1944, IDA represents all dairy producers within the state of Idaho. For more information, visit http://idahodairymens.org . 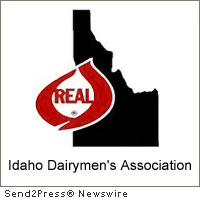 NEWS ARCHIVE NOTE: this archival news content, issued by the news source via Send2Press Newswire, was originally located in the Send2Press® 2004-2015 2.0 news platform and has been permanently converted/moved (and redirected) into our 3.0 platform. Also note the story “reads” counter (bottom of page) does not include any data prior to Oct. 30, 2016. This press release was originally published/issued: Wed, 28 Sep 2011 09:59:19 +0000

LEGAL NOTICE AND TERMS OF USE: The content of the above press release was provided by the “news source” Idaho Dairymen's Association or authorized agency, who is solely responsible for its accuracy. Send2Press® is the originating wire service for this story and content is Copr. © Idaho Dairymen's Association with newswire version Copr. © 2011 Send2Press (a service of Neotrope). All trademarks acknowledged. Information is believed accurate, as provided by news source or authorized agency, however is not guaranteed, and you assume all risk for use of any information found herein/hereupon.