‘Questing for Uberjoy,’ a Luminous New Novel from Konrad Ventana, Takes the Reader to New Heights of Drama, Action, and Adventure

LOS ANGELES, Calif., Sept. 29, 2011 (SEND2PRESS NEWSWIRE) — Just Released: Konrad Ventana’s “Questing for Uberjoy” (ISBN: 978-1-46202-953-2) is now available as Hardcover, Softcover, and eBook versions. In this stunning new novel, Ventana sweeps the reader off into a world of high drama and adventure in the remote Himalayan mountains of Nepal and Tibet where lofty ideals clash with the myth of the conquering hero until nothing, not even the evening stars, will ever appear quite the same. The story begins as a quest to rescue a kidnapped Peace Corps volunteer and the young schoolgirls of a Sherpa village in Nepal, only to expand in scope upon the mythic landscapes of Tibet, where earth meets sky in more ways than one.

This is Himalayan Action and Adventure at its awe-inspiring, breath-taking, heart-pounding best!!!

They called her “Uberjoy,” but her real name was Joycelyn Eberhard. She was a finalist in the Miss Teen Idaho beauty pageant, but now she’s gone missing-in China, no less. Her fiance, Orion, worried when she signed up for the Peace Corps, but he never expected something like this. Her disappearance is shattering to him, so he has no choice but to head overseas and search for the woman he loves. His search takes him to the remote Himalayan Mountains in Nepal and Tibet, where getting help from local authorities is not as easy as he would have hoped. He is forced to seek assistance elsewhere, from intrepid special operations mercenaries and unorthodox mountaineering guides.

“Questing for Uberjoy” is a quest for love. It is also a quest for meaning, as Eastern culture surrounds heroic Orion and teaches him more about himself than any experience in America. One moment philosophical and the next filled with extreme danger, it is a story that could change your life and send you on your own heroic quest.

Winner of 2011 “Editor’s Choice” and “Rising Star” distinctions, and praise from Book Reviewers:

“I’ve just finished reading Konrad Ventana’s ‘Questing for Uberjoy’ and I must say it is masterfully done. The adventure storyline is terrific, the philosophy intellectually and emotionally meaningful, and the attention to writer’s craft apparent. The novel features many unforgettable scenes and outstanding, beautifully painted imagery that will stick with readers long after they’ve put the book aside.”

“The disappearance of a beautiful Peace Corps volunteer makes for a great adventure story. Orion’s character-arc begins with a crushingly powerful one-dimensional outlook and philosophy. However, Orion’s one-dimensional outlook is his flaw, and this is a masterful stroke by the author, since Orion’s character does indeed arc and change into flesh and blood with increasing tenderness and passion throughout.”

“Thank you for the opportunity to review the fascinating work you have done to bring ‘Questing for Uberjoy’ to fruition. As someone who successfully completed Peace Corps training (for Colombia before the drug lords took over) only to be drafted, I took a special interest in the plot of this book…. Well done! This book is engaging, interesting, and exciting, all at the same time. Readers will devour the story and tell their friends about it!”

“Questing for Uberjoy is, among other things, a great and adventurous journey that will engage readers, getting their hearts racing so they can’t wait to turn the page and find out what happens next. The novel has a terrific cast of characters that readers will unabashedly root for (even in their less than ‘perfect’ moments) as they move forward in their quests against evil and for undying love.”

“Questing for Uberjoy was a pleasure to read and review. The plot and characters are incredibly engaging, and the deeply detailed world brings the terrain and the quest to life, to say the least. More, the high-minded style and use of language serves to heighten the reader’s experience and truly convey the allegory and dramatization of the main scenes, the overarching philosophy, and the emotional drive behind the book. Behind the pseudonym Konrad Ventana is a skillful storyteller; his narrative voice is clear, confident, and distinctive, and the pacing is excellent. It is clear that he has honed his craft through years of writing.” 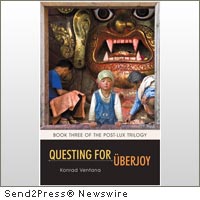 NEWS ARCHIVE NOTE: this archival news content, issued by the news source via Send2Press Newswire, was originally located in the Send2Press® 2004-2015 2.0 news platform and has been permanently converted/moved (and redirected) into our 3.0 platform. Also note the story “reads” counter (bottom of page) does not include any data prior to Oct. 30, 2016. This press release was originally published/issued: Thu, 29 Sep 2011 09:59:24 +0000

LEGAL NOTICE AND TERMS OF USE: The content of the above press release was provided by the “news source” Konrad Ventana or authorized agency, who is solely responsible for its accuracy. Send2Press® is the originating wire service for this story and content is Copr. © Konrad Ventana with newswire version Copr. © 2011 Send2Press (a service of Neotrope). All trademarks acknowledged. Information is believed accurate, as provided by news source or authorized agency, however is not guaranteed, and you assume all risk for use of any information found herein/hereupon.