NEW YORK, N.Y., Oct. 3, 2011 (SEND2PRESS NEWSWIRE) — The Houdini Museum, a 501(c)3 nonprofit museum in Scranton, PA, had a secret project to restore Houdini’s grave site bust for over 20 years. It reached full intensity in the past year. The original statuary bust was installed after Houdini’s death in 1926. It was destroyed by vandals in 1975. It has been gone for 36 years. Several composition, or plastic, busts were placed there briefly but lasted a short time or were used one day each year – October 31, for a ceremony done by The Society of Americans – that brought more grief to the cemetery. Because of this the cemetery now closes on Halloween, the date of Houdini’s death.

Many consultants were contacted in conjunction with this plan. Nothing was to get in our way. Peter Blacksberg, the president of Riverside Cemetery, a Jewish cemetery in Saddlebrook, New Jersey, was contacted for advice. We were told to get a letter from the closest living relatives going back to Houdini’s death, and to have insurance in case anyone was hurt doing the repairs. This was done. A high profile New York lawyer, Gary Pillersdorf, was contacted for advice and to bail us out in case we got arrested. We had all our ducks in a row. There had been some contention between the Society of American Magicians and the cemetery as to ownership of the grave. We decided not to contact them, to avoid any new problems with this project. We did try to contact the cemetery in the past but to no avail.

In the 1970’s The Society of American Magicians made a lightweight cast of an original bust now owned by the Museum of the City of New York. Houdini’s wife donated the original to that museum. The lightweight copy was on loan to magicians Dorothy Dietrich and Dick Brookz, owners of New York City’s Magic Towne House, who had it on display. The magicians currently run the nonprofit Houdini Museum in Scranton PA. The Society of American Magicians asked them to return the replica in 1979 and it was soon misplaced. For the sake of posterity, the two magicians secretly made a mold of the bust and put that in storage. In the past year they made five trial composition busts and finally three statuary cement busts. The best one destined to be installed at Houdini’s grave site. Another will be unveiled this year at the annual historic Houdini Seance on Halloween at The Houdini Museum. This event is free and open to the public by reservation.

A secret group called the “Houdini Commandos” was then formed. They were Dorothy Dietrich; Dick Brookz; Steve Moore, retired escape artist; along with Dean Allen, contractor; Tracy Bullaro, helper; Cathy Moore, helper; and Ron Chicken, videographer. The stealth plan was to get in and out unnoticed in one day.

Everything was ready. Diamond bits, drills, a powerful vacuum system, a generator (no electricity at the grave), special cements and epoxies, a way to safely transport the bust, etc. On several of the planned days flooding rains ensued and dates were changed. Everyone had to be available on the same day, which was almost impossible. Finally the day came. On September 27, 2011 everyone arrived by caravan at 10 a.m. and the work began. Each person had their assignments. Part way into the project a cemetery caretaker and watchman inquired what we were doing. Dorothy explained and tried to distract him with various papers, etc., as we continued working. He said we would have to stop until he called his boss. A long, almost non-ending phone conversation followed, and the issue of insurance came up. Our insurance agent faxed a letter and we were given the go ahead. Because of the lost time and other problems – such as a powerful construction cement drying too rapidly, having to drill it out and rushing to a local hardware store last minute for more – we did not finish until 7 p.m. The watchman had now become our supporter and allowed the cemetery to stay open an extra 3 hours.

This project has cost The Houdini Museum (http://houdini.org) close to $10,000, but it sorely needed to be done. Houdini, in his lifetime, had paid for the fixing of dozens of magicians graves that were in disrepair. This was only fitting payback. Kudos have come in to the Houdini Museum from historians and magicians from all over the world.

For more information and links to hi res pictures go to: http://houdini.org/houdinibust.html . 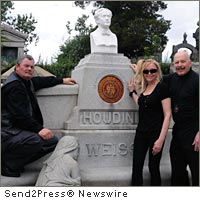 NEWS ARCHIVE NOTE: this archival news content, issued by the news source via Send2Press Newswire, was originally located in the Send2Press® 2004-2015 2.0 news platform and has been permanently converted/moved (and redirected) into our 3.0 platform. Also note the story “reads” counter (bottom of page) does not include any data prior to Oct. 30, 2016. This press release was originally published/issued: Mon, 03 Oct 2011 19:39:51 +0000

LEGAL NOTICE AND TERMS OF USE: The content of the above press release was provided by the “news source” Houdini Museum or authorized agency, who is solely responsible for its accuracy. Send2Press® is the originating wire service for this story and content is Copr. © Houdini Museum with newswire version Copr. © 2011 Send2Press (a service of Neotrope). All trademarks acknowledged. Information is believed accurate, as provided by news source or authorized agency, however is not guaranteed, and you assume all risk for use of any information found herein/hereupon.