Gates will open at 10 a.m. for the music festival, which will benefit the non-profit Foundation which provides philanthropic support to Leesburg Regional Medical Center and The Villages Health System. The Judds are scheduled to appear at 3 p.m. at the 400-acre Grand Oaks Resort located midway between Orlando and Ocala and just eight miles from The Villages.

General seating tickets are $35. Preferred and VIP seating are available $60 and $125. All major credit cards are accepted. For directions to the resort, visit http://www.TheGrandOaks.com . Tickets are also available through http://www.ticketmaster.com or by calling 1-800-745-3000.

“Naomi and Wynonna won the Country Music Association’s Vocal Group/Duo of the Year Award every year from 1985 to 1991,” said Williams. “Then, Naomi was diagnosed with a serious illness that cost her health, her ability to tour, and nearly her life. Today, she is healthier than ever and touring has re-energized her relationship with her daughter. Together, they’ve given ‘Juddheads’ a chance to celebrate their music, and exposed a whole new generation to their breakout hits including “Mama, He’s Crazy,” “Why Not Me,” “Love Can Build a Bridge,” “Girls Night Out,” and “Grandpa (Tell Me ‘Bout the Good Old Days).” 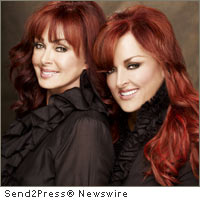 NEWS ARCHIVE NOTE: this archival news content, issued by the news source via Send2Press Newswire, was originally located in the Send2Press® 2004-2015 2.0 news platform and has been permanently converted/moved (and redirected) into our 3.0 platform. Also note the story “reads” counter (bottom of page) does not include any data prior to Oct. 30, 2016. This press release was originally published/issued: Thu, 06 Oct 2011 21:59:57 +0000

LEGAL NOTICE AND TERMS OF USE: The content of the above press release was provided by the “news source” Alliance Healthcare Foundation or authorized agency, who is solely responsible for its accuracy. Send2Press® is the originating wire service for this story and content is Copr. © Alliance Healthcare Foundation with newswire version Copr. © 2011 Send2Press (a service of Neotrope). All trademarks acknowledged. Information is believed accurate, as provided by news source or authorized agency, however is not guaranteed, and you assume all risk for use of any information found herein/hereupon.