LOS ANGELES, Calif., Oct. 7, 2011 (SEND2PRESS NEWSWIRE) — Sky Ball League, the next generation coed pro sport, wraps up its first season on SNY.tv Saturday, October 8 at 10:30 a.m. The championship game between the Los Angeles 405s and the Youngstown Ballers will decide who goes home with the $40,000 purse, as well as naming the MVP who pockets an additional $5,000. Sky Ball League has been airing since mid-July and has racked-up over a million weekly viewers.

Previously shot in Los Angeles, the championship play-by-play is announced by Van Earl Wright, former CNN anchor and a past host on FSN Final Score. Brian Dunkleman, one of the original co-hosts of American Idol, hosted the 16 episodes in the Sky Ball League series.

Sky Ball is an extremely competitive and spirited combination of basketball, baseball and volleyball, with a little lacrosse thrown in. The game uses Sky Balls and smash gloves and is played on a court with goals set at each end that consist of three scoring pads raised 12 – 17 feet above the court. Game highlights: http://www.youtube.com/watch?v=9pCD1YXJ9iM .

Brian Kessler, co-creator of The Sky Ball League along with sports executive Danny Swartz, says, “The huge success of our first season exceeded our expectations. We started out small and snowballed to the finals with amazing athletes, great personalities and a tremendous fan base. Next season we will be increasing the number of teams that will play in the league.”

“Sky Ball League has just scratched the surface of the sports world,” adds Swartz, “as evidenced by the ever-increasing numbers of athletes registering online to compete in our second season.”

Slightly larger than a softball and pumped with oxygen and helium, Sky Balls are capable of bouncing up to 75 feet. Besides the requisite physical dexterity, the challenge to players is that they must not only excel in controlling the ball, but the skillful manipulation of a challenging piece of equipment.

Notes Kessler, “Age knows no bounds in this energetic game. Across the entire league, this season’s players ranged between 18 and 39, and neither age nor gender has made a bit of difference on how well anyone plays.” 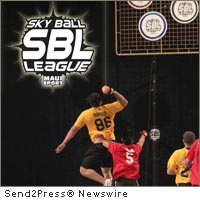 NEWS ARCHIVE NOTE: this archival news content, issued by the news source via Send2Press Newswire, was originally located in the Send2Press® 2004-2015 2.0 news platform and has been permanently converted/moved (and redirected) into our 3.0 platform. Also note the story “reads” counter (bottom of page) does not include any data prior to Oct. 30, 2016. This press release was originally published/issued: Fri, 07 Oct 2011 10:59:57 +0000

LEGAL NOTICE AND TERMS OF USE: The content of the above press release was provided by the “news source” Sky Ball League or authorized agency, who is solely responsible for its accuracy. Send2Press® is the originating wire service for this story and content is Copr. © Sky Ball League with newswire version Copr. © 2011 Send2Press (a service of Neotrope). All trademarks acknowledged. Information is believed accurate, as provided by news source or authorized agency, however is not guaranteed, and you assume all risk for use of any information found herein/hereupon.