First US Outdoor Showing of ‘Hell on Wheels’ announced for Bike the Coast – Taste the Coast on Nov 4, 2011

OCEANSIDE, Calif., Oct. 7, 2011 (SEND2PRESS NEWSWIRE) — Event Media Inc., organizers of Bike The Coast – Taste The Coast, add Movie Night on Friday, November 4, between 6 and 8 p.m. at the Bandshell next to the Oceanside Pier. It will be the first U.S. outdoor showing of the classic cycling movie “Hell On Wheels” presented by Visit Oceanside Conference and Visitors Bureau.

“Hell On Wheels” (83 minutes) is the German documentary (English subtitles) of the 2003 Tour de France that featured a stirring battle between Lance Armstrong and the German rider Jan Ulrich. It was the record tying 5th win for Lance with a race that wasn’t decided until a crash on the final time trial before the ride into Paris.

The evening’s entertainment starts promptly at 6 p.m. Admission to the movie is free and held in conjunction with the Bike The Coast packet pick-up, late registration, food fest and sports expo, which are open from noon until 8 p.m. The Friday Night Beer Garden opens at 4 p.m. and goes until 8 p.m. Seating is “Open” in both the bleachers and floor section. Comfortable low back beach chairs and blankets are recommended. Food booths are provided through MainStreet Oceanside, producers of the well-loved weekly “Sunset Market” (www.msoceanside.com) and the projection and sound are courtesy of Hollywood Outdoor Movies (www.hollywoodoutdoormovies.com).

About Bike the Coast – Taste the Coast:
Bike the Coast – Taste the Coast is a bicycle ride with a choice of 7, 15, 25, 50 and 100-mile rides starting and finishing with food, fun and music at the Oceanside Pier on Saturday, Nov. 5. The cycling courses include the San Luis Rey Bike Trail and San Diego’s North County beaches of Oceanside, Carlsbad, Encinitas, Solana Beach and Del Mar. Proceeds from the ride support the San Diego County Bicycle Coalition (www.sdcbc.org), a 501(c)3 non-profit organization dedicated to making bicycling better in greater San Diego. The ride is supported locally by the Oceanside Bicycle Committee. (Howard LaGrange and Pete Penseyres, co-Founders and Chairmen).

For more information on Bike the Coast – Taste the Coast, including course maps, event schedule and registration, visit: www.bike-the-coast.com.

For sponsorship and expo information, visit www.seasickmarketing.com, or call 858.259.1501.

For travel and hotel information, including local discounts, visit www.VisitOceanside.org . 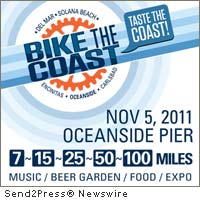 NEWS ARCHIVE NOTE: this archival news content, issued by the news source via Send2Press Newswire, was originally located in the Send2Press® 2004-2015 2.0 news platform and has been permanently converted/moved (and redirected) into our 3.0 platform. Also note the story “reads” counter (bottom of page) does not include any data prior to Oct. 30, 2016. This press release was originally published/issued: Fri, 07 Oct 2011 17:58:22 +0000