It details how to reduce, reuse, recycle and respond and can be read in full here: www.ballantine.com/2011/10/10/green-direct-mail/.

“Green direct mail continues to be an important topic,” says Ryan Cote, director of marketing for the Ballantine Corporation. “We hope that this white paper will provide businesses with useful and practical tips to help make its direct mail greener.”

Additionally, green direct mail not only demonstrates a business’s commitment to the environment, it can also help to save money in certain cases.

“The Four R’s of Green Direct Mail” provides specific tactics that can be easily employed. For example, reducing materials used is one of the easiest ways to get started and includes actions such as linking to online content; using press-efficient formats; fine-tuning targeted mailing lists; and more.

And, while many marketing departments have some type of recycling program in place there are ways that businesses can also encourage their customers to recycle and make the process even that more effective.

Another “R” – reusing – may prove to be the most difficult to implement, but it may also have the greatest number of options to choose from.

Finally, a business should “respond.”

“There’s nothing wrong with a company tooting its own horn,” says Cote. “If it is making efforts to become ‘greener,’ there are several ways that it can communicate this to its customer base. Everyone will benefit.”

About Ballantine:
Family-owned since 1966, The Ballantine Corporation is a New Jersey-based company offering direct marketing services to companies nationwide.

News issued by: The Ballantine Corporation 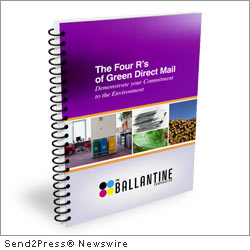 NEWS ARCHIVE NOTE: this archival news content, issued by the news source via Send2Press Newswire, was originally located in the Send2Press® 2004-2015 2.0 news platform and has been permanently converted/moved (and redirected) into our 3.0 platform. Also note the story “reads” counter (bottom of page) does not include any data prior to Oct. 30, 2016. This press release was originally published/issued: Wed, 12 Oct 2011 16:59:39 +0000

More from The Ballantine Corporation

ABOUT THE NEWS SOURCE:
The Ballantine Corporation

LEGAL NOTICE AND TERMS OF USE: The content of the above press release was provided by the “news source” The Ballantine Corporation or authorized agency, who is solely responsible for its accuracy. Send2Press® is the originating wire service for this story and content is Copr. © The Ballantine Corporation with newswire version Copr. © 2011 Send2Press (a service of Neotrope). All trademarks acknowledged. Information is believed accurate, as provided by news source or authorized agency, however is not guaranteed, and you assume all risk for use of any information found herein/hereupon.