Remembering Flopsy Parker, the $7.50 Rabbit That Tried to Change the World for Real Easter Bunnies

WASHINGTON, D.C., March 12, 2012 (SEND2PRESS NEWSWIRE) — “The Easter Bunny That Grew Up” (ISBN: 978-1-4685-5496-0) is a children’s book that pays tribute to a little rabbit that captured the hearts of people around the world on Facebook and the contributions he made to rabbits in rescues and shelters. On September 26th, 2010 Gretta Parker started a journey she was not planning on when she adopted a little white rabbit for $7.50 from a local shelter.

On a whim she made him a Facebook page where she could talk about adopting rabbits and rabbit care. She posted adoption ads and wrote about how Flopsy loved to flip things. She started making adoption awareness posters using his image. People began to share them and his page. Gretta told her family and friends that he was going to be the $7.50 rabbit that changed the world for all rabbits.

By 2011, Flopsy Parker had become a household name for his humor, his message of adoption and his honesty about how much care rabbits need. He was even quoted by the Wall Street Journal when he was outraged over the Royal Shakespeare Company using real dead rabbits in their stage productions. 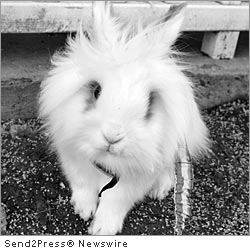 Gretta taught herself how to make designs with his images and started a store on Cafepress using Flopsy’s image and her designs that sent the message that shelter bunnies are the best kind. She donated the proceeds to a different rabbit rescue each month. In the summer of 2011, Gretta pooled all her savings to start Baskets for Bunnies, Inc. a 501(c) non-profit that sends supplies to rabbit rescues on a monthly basis. Flopsy was of course the “spokesbunny.”

Flopsy not only inspired her to do more but he had become her teacher to the issues that rabbits face. The truth is rabbits are the third most abandoned animal in the United States but they do not get the funding or protection they need due to agricultural laws that govern them. She set her sights to changing this. By fall 2011, she started making plans to get funding for a nationwide spay and neuter program for rabbits.

In December 2011, with the help of a rabbit toy company called Pet Rabbit Toys she started Toys for Hops; a program to raise toys to send to rabbits in rescues in shelters. In less than 16 days, with the support of all of Flopsy’s Facebook fans they raised 2,000 toys that went to rescues and shelters all over the United States by Christmas.

On the evening of December 28th Flopsy Parker passed away suddenly from a congenital kidney defect. His Facebook page got so many posts that it shut his timeline down in less than 24 hours. People posting how he had influenced them to adopt, or how he made them laugh. His mother received letters from all over the world, all people who had been touched by a $7.50 rabbit that another family had chosen to give up. Gretta had been right he had started to change the world for rabbits.

To cope with her grief, Gretta Parker wrote a book called “The Easter Bunny That Grew Up” as a tribute to his short but big life. She decided that death would not be the end of their journey together but the beginning of a new one. Flopsy would always be her partner, son, best friend and continue to lead her to fight for the rights of rabbits. The book teaches about researching an animal’s care needs before buying, supporting rabbit rescues, and that sometimes the greatest treasures are the ones other people discard.

His mother plans to use the proceeds from the book to continue the work of Baskets for Bunnies, Inc. and to build a sanctuary in Flopsy’s name. The Flopsy Parker Memorial Sanctuary will house rabbits with behavioral or health issues and elderly rabbits. It will truly be the sanctuary that a mother’s love built. NEWS ARCHIVE NOTE: this archival news content, issued by the news source via Send2Press Newswire, was originally located in the Send2Press® 2004-2015 2.0 news platform and has been permanently converted/moved (and redirected) into our 3.0 platform. Also note the story “reads” counter (bottom of page) does not include any data prior to Oct. 30, 2016. This press release was originally published/issued: Mon, 12 Mar 2012 16:53:18 +0000

More from Baskets for Bunnies, Inc.

ABOUT THE NEWS SOURCE:
Baskets for Bunnies, Inc.

LEGAL NOTICE AND TERMS OF USE: The content of the above press release was provided by the “news source” Baskets for Bunnies, Inc. or authorized agency, who is solely responsible for its accuracy. Send2Press® is the originating wire service for this story and content is Copr. © Baskets for Bunnies, Inc. with newswire version Copr. © 2012 Send2Press (a service of Neotrope). All trademarks acknowledged. Information is believed accurate, as provided by news source or authorized agency, however is not guaranteed, and you assume all risk for use of any information found herein/hereupon.