"I'm not looking to compete with any of the great writers out there. I wanted to write something very unique: learning prayer through the fun of a novel. What you are not seeing in the bookstores is a book like 'The Pray-ers,'" says Mark S Mirza.

ATLANTA, Ga., April 11, 2016 (SEND2PRESS NEWSWIRE) — CTM Publishing’s display at the 2016 Alabama Book Festival will feature the new fiction trilogy “The Pray-ers” by Mark S Mirza. The 11th annual Alabama Book Festival will be held at Old Alabama Town in downtown Montgomery on Saturday, April 23, 2016. The Festival is the state’s premier literary event and attracts thousands of people from around the State and the Southeast.

LEARNING PRAYER THRU THE FUN OF A NOVEL: “THE PRAY-ERS”:

Author / Speaker Mark S Mirza states, “I want people to enjoy a novel and at the end of the book to realize that they have learned how to pray through the example of the three historical figures in this book: Epaphras from the first century Christian Church, Brother Alexander Rich from the period of the American Civil War, and Coach Dale Riley of the current era.”

When asked what he is seeing on prayer in the bookstores, Mark answers: “Lots of great ‘how to’ books and lots of great theory. I’m not looking to compete with any of the great writers out there. I wanted to write something very unique: learning prayer through the fun of a novel. What you are not seeing in the bookstores is a book like ‘The Pray-ers.'” 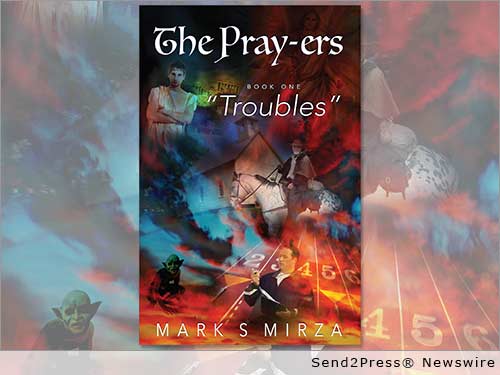 About Mark S Mirza:
Mark S Mirza is an author, speaker, and student of prayer. He led Dr. Charles Stanley’s Men’s Prayer Ministry at First Baptist Church Atlanta for four and a half years before entering full-time ministry. In 2010 Mark founded Common Thread Ministries to help churches that want to have a prayer ministry. Mark teaches throughout the United States as well as in Mexico, Honduras, and Kenya.

He is the author / publisher of four books of which one has been translated into three languages: “Prayer Made Alive” (English), “Oracion con Vida” (Spanish), and “Maombi Kufanywa Hai” (Swahili). Mark’s other books include “Praying the Prayer Cards,” the children’s book “Rainbow of Promises,” and the new fiction trilogy: “The Pray-ers.”

Mark and his wife Naida live in Atlanta and have a horse, Coracao, boarded in North Ga. where they spend much of their spare time.

NEWS ARCHIVE NOTE: this archival news content, issued by the news source via Send2Press Newswire, was originally located in the Send2Press® 2004-2015 2.0 news platform and has been permanently converted/moved (and redirected) into our 3.0 platform. Also note the story “reads” counter (bottom of page) does not include any data prior to Oct. 30, 2016. This press release was originally published/issued: Mon, 11 Apr 2016 07:00:00 +0000

The Pray-ers Book One

View More Atlanta Business News
"I'm not looking to compete with any of the great writers out there. I wanted to write something very unique: learning prayer through the fun of a novel. What you are not seeing in the bookstores is a book like 'The Pray-ers,'" says Mark S Mirza.

LEGAL NOTICE AND TERMS OF USE: The content of the above press release was provided by the “news source” CTM Publishing Inc. or authorized agency, who is solely responsible for its accuracy. Send2Press® is the originating wire service for this story and content is Copr. © CTM Publishing Inc. with newswire version Copr. © 2016 Send2Press (a service of Neotrope). All trademarks acknowledged. Information is believed accurate, as provided by news source or authorized agency, however is not guaranteed, and you assume all risk for use of any information found herein/hereupon.