“These new multipurpose and multifunctional screen protectors will work for Apple iPhones, Samsung Galaxy 3S phones, Apple iPads and much, much more,” Michael Doyle, Director of Sales for Accurate Imaging, says. “What really sets these screen protectors apart from others is that they are not only antimicrobial, but they can be customized to fit any size screen and they offer high transparency for sharper imaging.”

So, how do they work? Special coatings are applied to the film’s surface that includes an antimicrobial element that prevents bacteria growth on the screen.

“We are especially proud of our antimicrobial feature,” Doyle says. “It promotes better health practices by eliminating transfer of germs from hand to face that may linger on the phone screen protector.”

These screen protectors also work to eliminate glare and fingerprints and can be easily removed and attached without leaving any residue behind on the screen surface. This ensures that the screen’s surface is not damaged.

Doyle says that most of the glass surfaces, including the famous “Gorilla Glass™” by Corning™ have an Oleophobic coating on the screen surface. This coating is important to the hardness of the glass and how the touch sensation interacts with the electronics of the device itself; it also prevents scratching.

“If this coating gets worn off, or washed off by household cleaning products, it will cause the device’s touch sensation to malfunction,” Doyle says. “Accurate Imaging’s screen protectors will not only protect the screen coatings, but also the screen surface.”

About Accurate Imaging Resources:
Since 1978, Accurate Imaging Resources has sold polyester film products in the facsimile and bar code/label printer market. The same base film that is used in thermal transfer film ribbons is now being used to protect and offer health-conscious functions for cell phone, tablet and other screen use. The newly-branded Accurate Films’ product line plans to add more devices that cater to Point of Sale (POS) cash registers, kiosks and medical device markets. 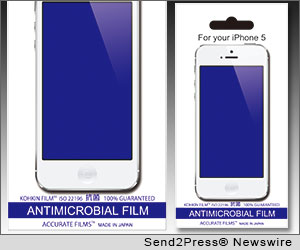 NEWS ARCHIVE NOTE: this archival news content, issued by the news source via Send2Press Newswire, was originally located in the Send2Press® 2004-2015 2.0 news platform and has been permanently converted/moved (and redirected) into our 3.0 platform. Also note the story “reads” counter (bottom of page) does not include any data prior to Oct. 30, 2016. This press release was originally published/issued: Fri, 11 Jan 2013 18:09:51 +0000

LEGAL NOTICE AND TERMS OF USE: The content of the above press release was provided by the “news source” Accurate Imaging Resources or authorized agency, who is solely responsible for its accuracy. Send2Press® is the originating wire service for this story and content is Copr. © Accurate Imaging Resources with newswire version Copr. © 2013 Send2Press (a service of Neotrope). All trademarks acknowledged. Information is believed accurate, as provided by news source or authorized agency, however is not guaranteed, and you assume all risk for use of any information found herein/hereupon.