A former contestant on Season 4 of NBC’s hit show “The Voice,” Glaser will open for fellow singer/songwriter, and winner of “American Idol” Season 9, Kris Allen, for several shows in February, beginning at The Watseka Theatre in Watseka, Illinois on February 8, 2014.

Glaser and Reis were last together on the road in December, when they finished the three-month nation-wide “Under the Influence” tour with Atlantic Records a cappella sensation Straight No Chaser. Joining the duo this time out will be guitarist Matt Goodloe, also of twelve3south.

Twelve3south and Reis recently co-produced the song “Money Tree” with producer Steve Lunt, whose production credits include talents such as Straight No Chaser, Britney Spears, and Backstreet Boys. The song, from Glaser’s first EP, “Caroline Glaser, Vol. 1,” eventually reached the No. 2 spot on the “Singer/Songwriter” charts on iTunes.

The tour opens in Watseka before moving through Michigan, Ohio, and Pennsylvania, and finally wrapping up on February 27 in Glaser’s hometown of St. Louis, Missouri. Full details of dates and venues are available at http://donniereis.com/ and http://carolineglaser.com/tour.

About Twelve3South Studio:
Twelve3South is equipped with the music industry’s most cutting edge signal chains utilizing the latest innovations in technology along with the best in tested, classic analogue signal processing. Producer Donnie Reis, however, is most proud of the great team of engineers and players that truly makes it fun to come to work every day. Twelve3South is equipped with a full Avid ProTools HD Native system utilizing Apogee’s flagship interface, the Symphony I/O with 24 channels of analog I/O, implementing the best AD/DA converters the industry has to offer. Twelve3South also uses Avid’s C|24 control surface and its 16 onboard mic pres to help maximize workflow.

About Caroline Glaser:
Best known for her appearance on season four of NBC’s “The Voice,” Glaser hails from Missouri. Caroline is an indie/folk singer currently studying education at the University of Kansas. She is a big fan of musicians Sara Bareilles, Ingrid Michaelson and Ben Folds, and she plays the guitar, ukulele and piano. Glaser recently was on tour opening for Straight No Chaser and their nationwide Under the Influence Tour. Glaser has just released her debut three-song EP entitled “Caroline Glaser, Vol. 1.” 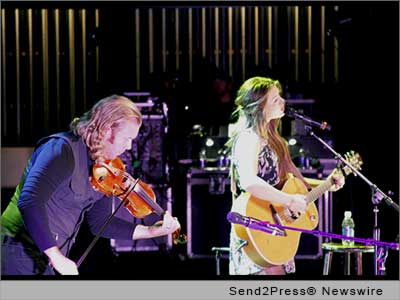 NEWS ARCHIVE NOTE: this archival news content, issued by the news source via Send2Press Newswire, was originally located in the Send2Press® 2004-2015 2.0 news platform and has been permanently converted/moved (and redirected) into our 3.0 platform. Also note the story “reads” counter (bottom of page) does not include any data prior to Oct. 30, 2016. This press release was originally published/issued: Mon, 10 Feb 2014 17:44:25 +0000

LEGAL NOTICE AND TERMS OF USE: The content of the above press release was provided by the “news source” Twelve3south or authorized agency, who is solely responsible for its accuracy. Send2Press® is the originating wire service for this story and content is Copr. © Twelve3south with newswire version Copr. © 2014 Send2Press (a service of Neotrope). All trademarks acknowledged. Information is believed accurate, as provided by news source or authorized agency, however is not guaranteed, and you assume all risk for use of any information found herein/hereupon.