"Customer feedback pointed to some limitations in KaleidaGraph," William Jones, vice president of research and development says. "The main focus of 4.5 is to service our client base by addressing those issues, and enhancing KaleidaGraph to better meet their needs."

“Customer feedback pointed to some limitations in KaleidaGraph,” William Jones, vice president of research and development says. “The main focus of 4.5 is to service our client base by addressing those issues, and enhancing KaleidaGraph to better meet their needs.”

Strengthening one of the most popular functions of KaleidaGraph, changes made to the linear curve fit allows the computation of the confidence interval, and increased statistical analysis. For all curve fits v4.5 has also added exporting predicted values to the data window. “Users no longer have to export results from each of the fits,” Jones says. “With one command, they will get a table with all of the relevant information.”

New Features: Floating bar, floating column and fill plots have been added to the new version. The addition of the new Slice Data command allows data to be reorganized quickly and easily. Now, Dropped Lines helps determine the value where each data point falls on the X or Y axis of a plot.

Enhanced Features: Users can now control the display of the plot more accurately and with expanded tools. There are now 99 variables; 24 new markers; independent line and fill color; and the ability to read new Excel formats. Plus, for each axis, users now have complete control over the color of the axes, major and minor ticks and major and minor grids. Enhanced scripting commands make it easier to customize plots, apply curve fits and control the size and resolution of exported images.

Image exporting has also been improved, and allows higher resolution JPG, PNG and TIFF images to be created, in grayscale, color or CMYK TIFF.

About KaleidaGraph:
KaleidaGraph is a thoughtfully-designed graphing and data analysis application for research scientists, as well as for those in business and engineering fields. It produces publication-quality graphs, and easily converts the most complex data into a functional display. 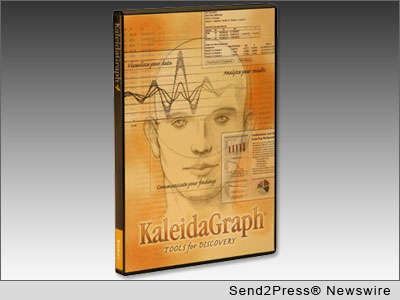 NEWS ARCHIVE NOTE: this archival news content, issued by the news source via Send2Press Newswire, was originally located in the Send2Press® 2004-2015 2.0 news platform and has been permanently converted/moved (and redirected) into our 3.0 platform. Also note the story “reads” counter (bottom of page) does not include any data prior to Oct. 30, 2016. This press release was originally published/issued: Tue, 01 Oct 2013 17:06:27 +0000

View More Aerospace and Aviation News
"Customer feedback pointed to some limitations in KaleidaGraph," William Jones, vice president of research and development says. "The main focus of 4.5 is to service our client base by addressing those issues, and enhancing KaleidaGraph to better meet their needs."

ABOUT THE NEWS SOURCE:
Synergy Software

LEGAL NOTICE AND TERMS OF USE: The content of the above press release was provided by the “news source” Synergy Software or authorized agency, who is solely responsible for its accuracy. Send2Press® is the originating wire service for this story and content is Copr. © Synergy Software with newswire version Copr. © 2013 Send2Press (a service of Neotrope). All trademarks acknowledged. Information is believed accurate, as provided by news source or authorized agency, however is not guaranteed, and you assume all risk for use of any information found herein/hereupon.