SAN FRANCISCO, Calif., March 4, 2014 (SEND2PRESS NEWSWIRE) — Kamen George Kamenov, a U.S. inventor, today announced that he has patented a new way to support windmill blades and to triple the amount of energy extracted from the wind. Patent #8629570 has been assigned to these wind turbine blades with reinforcing, supporting and stabilizing components and enlarged swept area.

“This more efficient and effective way to harness wind power could seriously change the face of the alternative energy industry,” Kamenov says.

And, with dwindling conventional energy sources for electricity production, wind power is on the rise. Natural energy forms, when properly managed, are inexhaustible.

So, this new invention for wind turbines is not only timely, but also well positioned for growth.

How do wind turbines work? Wind turbines convert the wind’s kinetic energy into mechanical power through the use of a rotor with blades that spin a shaft.

The shaft is connected to a generator that converts the mechanical power into electricity. The swept area is the total area inside the imaginary circle, which the blades make when they turn under the wind pressure. The larger the swept area, the more wind energy is captured. However, if you double the length of the blades, the swept area increases four times.

“That is the secret of this invention – increasing the length of the blades with no additional cost and at the same time reinforcing them so that they don’t break. Long blades are very expensive, unbalanced and can get damaged or break easily,” Kamenov says.

The advantages of using wind energy are that it’s renewable, nonpolluting and free. Disadvantages include diluted and unpredictable energy results, and high initial and maintenance cost.

This new invention is designed to meet many needs. They include the ability to reduce the cost of converting wind energy into electricity by providing a better construction and reinforcing and/or replacing the rotor and the blades with new and more efficient ones. It also hopes to use all wind potential, weak and strong and in more remote and high-location areas.

Available for licensing, some European, Chinese and Indian manufacturers and investors are already showing interest.

Patent specifics can be found here: http://www.google.com/patents/US8629570 or here: http://patft.uspto.gov/netahtml/PTO/srchnum.htm. Simply search for Patent #8629570, or contact the inventor at: kamengeorge@gmail.com; or kgkamenov@yahoo.com. 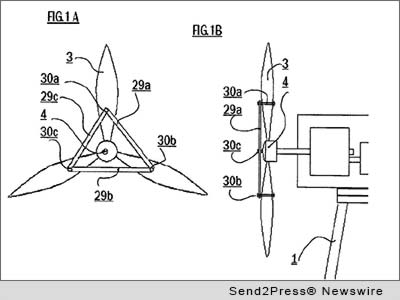 NEWS ARCHIVE NOTE: this archival news content, issued by the news source via Send2Press Newswire, was originally located in the Send2Press® 2004-2015 2.0 news platform and has been permanently converted/moved (and redirected) into our 3.0 platform. Also note the story “reads” counter (bottom of page) does not include any data prior to Oct. 30, 2016. This press release was originally published/issued: Tue, 04 Mar 2014 08:00:27 +0000

LEGAL NOTICE AND TERMS OF USE: The content of the above press release was provided by the “news source” Kamen George Kamenov or authorized agency, who is solely responsible for its accuracy. Send2Press® is the originating wire service for this story and content is Copr. © Kamen George Kamenov with newswire version Copr. © 2014 Send2Press (a service of Neotrope). All trademarks acknowledged. Information is believed accurate, as provided by news source or authorized agency, however is not guaranteed, and you assume all risk for use of any information found herein/hereupon.