Alec Monopoly adds, "I like painting for my own happiness. Graffiti is my true passion and I like seeing the reaction of people when they walk by my work and it inspires them."

NEW YORK, N.Y., Oct. 8, 2015 (SEND2PRESS NEWSWIRE) — Alec Monopoly is at Guy Hepner and he’s bringing the streets with him. Who is Alec Monopoly? While his true identity remains a mystery, chances you’ve been to Los Angeles, New York, Miami or London, you’ve probably driven past the Monopoly artist’s graffiti murals featuring widely-known, wealthy pop-culture figures from childhood, like the Monopoly Man, Richie Rich or Uncle Scrooge, or his interpretations of celebrity icons such as Michael Jackson, Bob Dylan, Jack Nicholson, Goldie Hawn and Twiggy.

The New York graffiti artist has made his mark all over the country, painting the facade of the numerous buildings and hotels including one giant duck at the SLS Hotel, billboards, a double-decker bus, a fleet of supercars and galleries all over including here at Guy Hepner.

“I was playing Monopoly and watching the news, and I saw Bernie Madoff being arrested. And it hit me, it was like a light bulb,” says Monopoly.

The New York street artist started painting the Monopoly Man everywhere! Any empty space, billboards or advertisement posters Alec could find, he began spray painting right over it. And of course, with Alec Monopoly graffiti, there comes an Alec Monopoly price. You couldn’t even count the number of times this bad boy had run-ins with the law; he’s even gone as far as jumping down N.Y. garbage chutes to get away.

He adds, “I like painting for my own happiness. Graffiti is my true passion and I like seeing the reaction of people when they walk by my work and it inspires them.”

Alec Monopoly’s art for sale stands out for his unconventional graffiti style that is colorful, happy and positive, such as Scrooge Money Bags and Island Graffiti Girl, rather than a gritty, underground representation in a part of the art world associated with crime and vandalism. He uses spray paint, acrylic, resin and newspaper clippings from the Financial Times and Wall Street Journal for most of his work. 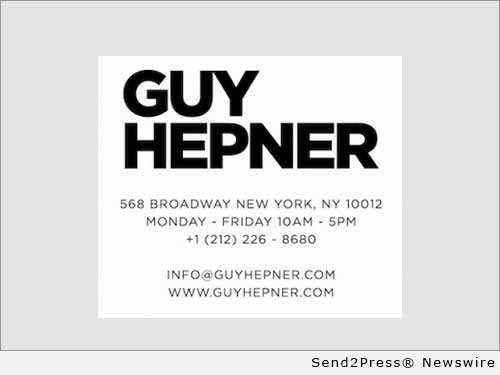 Having done gallery shows since 2008, Monopoly is concentrating on Asia in 2015, starting at Armani in Hong Kong during Art Basel. But don’t worry, if you’re too lazy to fill up the gas of your private jet, you can just browse online at Guy Hepner where we bring exclusive Alec Monopoly paintings and sculptures for sale to you 24 hours a day.

Alternate Headline: Alec Monopoly is at Guy Hepner in NYC and he’s bringing the streets with him

NEWS ARCHIVE NOTE: this archival news content, issued by the news source via Send2Press Newswire, was originally located in the Send2Press® 2004-2015 2.0 news platform and has been permanently converted/moved (and redirected) into our 3.0 platform. Also note the story “reads” counter (bottom of page) does not include any data prior to Oct. 30, 2016. This press release was originally published/issued: Thu, 08 Oct 2015 15:43:46 +0000

View More Entertainment News
Alec Monopoly adds, "I like painting for my own happiness. Graffiti is my true passion and I like seeing the reaction of people when they walk by my work and it inspires them."

ABOUT THE NEWS SOURCE:
Guy Hepner

LEGAL NOTICE AND TERMS OF USE: The content of the above press release was provided by the “news source” Guy Hepner or authorized agency, who is solely responsible for its accuracy. Send2Press® is the originating wire service for this story and content is Copr. © Guy Hepner with newswire version Copr. © 2015 Send2Press (a service of Neotrope). All trademarks acknowledged. Information is believed accurate, as provided by news source or authorized agency, however is not guaranteed, and you assume all risk for use of any information found herein/hereupon.