HIGHLANDS RANCH, Colo., Feb. 4, 2014 (SEND2PRESS NEWSWIRE) — Adoptions of older children and teens are often called “rescues” because kids “age out” at 16 Years-old. These children usually wind up homeless, with bleak futures. Many become addicted to drugs. Project One Forty Three, Inc., a non-profit organization presently working with orphanages in Ukraine, Latvia and China, pairs these forgotten, hard-to-adopt kids with “host families” in the United States for 4-6 weeks each summer and winter.

Through the experience, these children receive the love and kindness that leads to a better sense of self-worth whether or not they are ultimately placed with a family through one of several adoption service organization partners. Project 143 reports that almost 50 percent of hosted children do ultimately get adopted into their “forever families.”

Recording Artist John Waller’s latest release called “Orphan,” was inspired by the true story of how his family nearly doubled in size when they set out to rescue just one child from Ukraine.

With five children of their own, the Wallers originally planned to adopt a girl in China, but through a series of events including a vivid dream they were led to a Ukrainian girl named Anna. Along their journey they discovered that Anna had a brother in the same orphanage. After prayerfully considering bringing two children home and moving forward with arrangements, they discovered another sister living in a different facility. With three children about to become part of the Waller family, John’s wife Josee discovered she was expecting!

Reflecting on the extraordinary journey to becoming a father of nine, John wrote the “Orphan” song, sharing his story through music in the hope others will open their hearts and homes.

If you’ve ever been heartbroken over images of children caught in the middle of geopolitical conflicts, you can make a real difference. Learn more at http://p143.org/.

Just by watching the video and sharing the link with friends and family, you’ll help spread the word about these forgotten children and maybe even save a life! 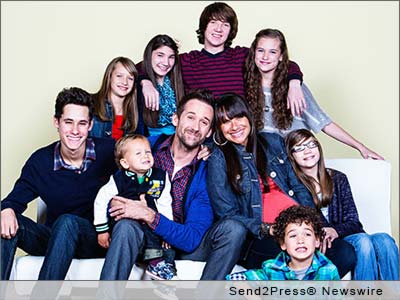 NEWS ARCHIVE NOTE: this archival news content, issued by the news source via Send2Press Newswire, was originally located in the Send2Press® 2004-2015 2.0 news platform and has been permanently converted/moved (and redirected) into our 3.0 platform. Also note the story “reads” counter (bottom of page) does not include any data prior to Oct. 30, 2016. This press release was originally published/issued: Tue, 04 Feb 2014 17:54:46 +0000

ABOUT THE NEWS SOURCE:
Project One Forty Three, Inc.

LEGAL NOTICE AND TERMS OF USE: The content of the above press release was provided by the “news source” Project One Forty Three, Inc. or authorized agency, who is solely responsible for its accuracy. Send2Press® is the originating wire service for this story and content is Copr. © Project One Forty Three, Inc. with newswire version Copr. © 2014 Send2Press (a service of Neotrope). All trademarks acknowledged. Information is believed accurate, as provided by news source or authorized agency, however is not guaranteed, and you assume all risk for use of any information found herein/hereupon.