"The wind gusts were boisterous enough to send several train cars careening over the trestle to the ground below. Tornados were also reported by the naval station southeast of NOLA and severe damage to roofs and homes in the area," says Michael Sims Sr.

METAIRIE, La., April 28, 2015 (SEND2PRESS NEWSWIRE) — “Monday brought some reports of more hail near the Louie Armstrong International Airport and the reports of hail and high winds reaching 111 MPH extended from the airport to the causeway bridge, just east of the city limits,” says Michael Sims Sr., of American Roofing and Building Supply.

Sims adds, “The wind gusts were boisterous enough to send several train cars careening over the trestle to the ground below. Tornados were also reported by the naval station southeast of NOLA and severe damage to roofs and homes in the area.”

Real estate agent Crystal Hatchett of Metairie noted, “I imagine with winds dramatic enough to blow train cars off a bridge, the damaged roofs are going to be substantial as well. We’ve begun to see a series of aggressive weather days in and around the New Orleans area from rain, hail and high winds that are causing significant damage to roofs and siding. Usually, these storm hold off till early June. We are just getting started with clean up and repairs from the hail storm as recent as ten days ago in the same area.”

Mike Sims of American Roofing and Building Supply said, “We are still open for business, although we have our own repairs to perform. We are prepared to serve local contractors and homeowners with good and reliable service, even when we suffer damage. This has happened to us in the past with hurricane Isaac in 2012. We had significant damage to our store property and remained open to the public. Although, yesterday’s damage was nothing compared to other storms.”

Mike also indicated that, “The standard wind warranty for roofing manufacturers for 3 tab shingles is rated at 60 mph well below yesterday’s storm gusts.”

American roofing and Building Supply has been serving the greater New Orleans area since 2005, and has recently relocated to 2009 Hullen Street just off Airline Dr., and the Causeway in Metairie. Mike invites you “to come and check out the selection of name brand, top of the line shingles as well as prices which are the lowest for economy roofing along the Gulf Coast.”

* Caption: Jaclyn Kelley sent in this picture of crews working to clear downed tree off cars in parking lot of Oschner in Kenner. Credit: American Roofing and Building Supply. 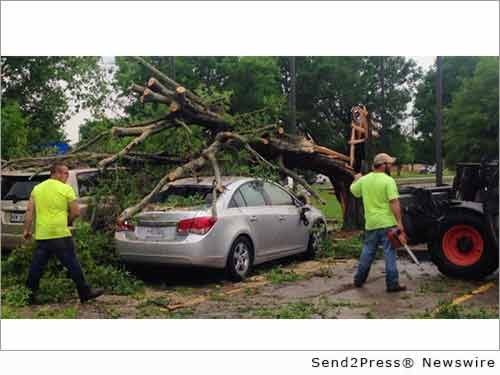 NEWS ARCHIVE NOTE: this archival news content, issued by the news source via Send2Press Newswire, was originally located in the Send2Press® 2004-2015 2.0 news platform and has been permanently converted/moved (and redirected) into our 3.0 platform. Also note the story “reads” counter (bottom of page) does not include any data prior to Oct. 30, 2016. This press release was originally published/issued: Tue, 28 Apr 2015 15:16:47 +0000

View More Building Products News
"The wind gusts were boisterous enough to send several train cars careening over the trestle to the ground below. Tornados were also reported by the naval station southeast of NOLA and severe damage to roofs and homes in the area," says Michael Sims Sr.

LEGAL NOTICE AND TERMS OF USE: The content of the above press release was provided by the “news source” American Roofing Supply or authorized agency, who is solely responsible for its accuracy. Send2Press® is the originating wire service for this story and content is Copr. © American Roofing Supply with newswire version Copr. © 2015 Send2Press (a service of Neotrope). All trademarks acknowledged. Information is believed accurate, as provided by news source or authorized agency, however is not guaranteed, and you assume all risk for use of any information found herein/hereupon.