PRINCETON, N.J., Aug. 7, 2014 (SEND2PRESS NEWSWIRE) — At Gettysburg, Abraham Lincoln proclaimed that “it is for us the living” to solve human problems if we are to achieve peaceful coexistence. The new book, “It Is For Us The Living: Pandora And The Secretary General” (ISBN: 978-1478730507) by John F. Brinster, is a work of fiction. It describes how the Secretary General of the New Third Millennium United Nations reorganized membership for successful planetary governance, spreading optimism and eliminating war.

The book also suggests that ancient scientists might have known about human structure well before our time and that Jesus could have been cloned in the first century in response to the Messianic Prophesy.

Epicurean secrets hidden in a Greek urn, called Pandora, were protected by the infectious Black Death adding to political intrigue and religious conflict in a unique and exciting underlying story.

This is the fifth book in the popular Cackelry series of literary satire described in a new website, http://www.brinsterbooks.com/. 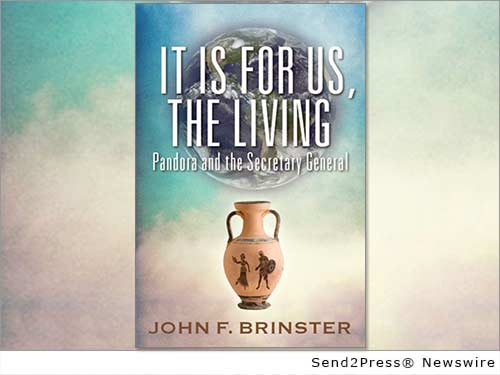 NEWS ARCHIVE NOTE: this archival news content, issued by the news source via Send2Press Newswire, was originally located in the Send2Press® 2004-2015 2.0 news platform and has been permanently converted/moved (and redirected) into our 3.0 platform. Also note the story “reads” counter (bottom of page) does not include any data prior to Oct. 30, 2016. This press release was originally published/issued: Thu, 07 Aug 2014 17:24:21 +0000