"Americans cannot think of each other as different. Our country was founded by people of varied cultures, coming together to find a better life. This made America great, and is who we are as a nation," says Hanan.

The USA has become ultra sensitive to the idea of outsiders living amongst them. Fears heightened after recent Paris attacks and the on-going manhunt for its coordinator. A domino effect of negative rhetoric feeding off real-world tragedy has impacted American minorities. Such fears are incited by Donald Trump’s controversial remarks during this year’s presidential campaign.

“Americans cannot think of each other as different. Our country was founded by people of varied cultures, coming together to find a better life. This made America great, and is who we are as a nation. We cannot allow political bullies and fear to change our fundamental identity, and I will certainly not allow them interfere with my run for Miss California,” said Hanan.

Hanan will continue to run for Miss California USA® despite Trump’s clearly stated fear of her cultural make-up. “Not only has Trump associated my Hispanic culture with drug dealers and criminals, he is now suggesting a movement which perpetuates false stereotypes that all Arabs participate in Terrorism.”

“I don’t understand why we continue to segregate ourselves. National identity has nothing to do with skin color, religion, or sexual orientation. I am a Palestinian-Latina-American running for Miss California and am as deserving of this title as any contestant. We all stem from different backgrounds and are all proud Americans. I’m as ‘red, white, and blue’ as anyone holding an American passport and will not allow paranoia to prevent pursuit of my dreams.”

Current Miss California USA®, Natasha Martinez, also of Hispanic decent, stood her ground, refusing to give up her title when Trump’s comments towards Latinos sparked an international boycott of the Miss Universe® Organization.

“I too intend to stand my ground,” Hanan said. “I will not buckle under pressure to get out of the public eye and will continue to represent mixed-race Americans during this time of fear and hysteria.”

Hanan stated that the vast majority of Arabs are completely uninvolved in the violence. “We condemn those who commit such horrific crimes. It is not just these violent acts we are against; we are against all violence.” Even though mounting suspicions unjustly lump all Arabs with terrorists, which spur hate crimes, Hanan says she will not let this prevent her from competing for this national title.

“Representing California is a way to help people see that being ethnic can still mean being American.” Hanan wants America to know more Arab-Latina Americans like her. She is 23-years old, and was born and raised in northern California. Hanan received a BA degree in Broadcast Journalism, and is formally trained in French cuisine by Le Cordon Bleu Los Angeles. Hanan aspires to work in Culinary Broadcasting. “My dreams are not so different than most Americans’,” Hanan said. 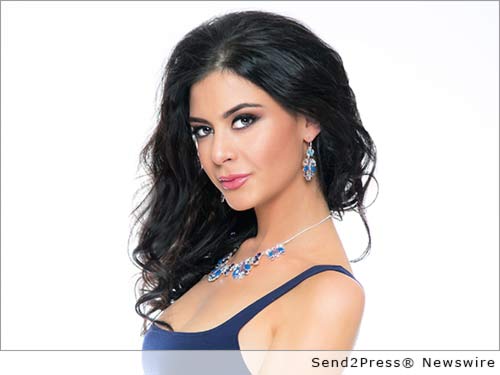 NEWS ARCHIVE NOTE: this archival news content, issued by the news source via Send2Press Newswire, was originally located in the Send2Press® 2004-2015 2.0 news platform and has been permanently converted/moved (and redirected) into our 3.0 platform. Also note the story “reads” counter (bottom of page) does not include any data prior to Oct. 30, 2016. This press release was originally published/issued: Tue, 24 Nov 2015 08:00:54 +0000

View More Entertainment News
"Americans cannot think of each other as different. Our country was founded by people of varied cultures, coming together to find a better life. This made America great, and is who we are as a nation," says Hanan.

ABOUT THE NEWS SOURCE:
Sofia Hanan

LEGAL NOTICE AND TERMS OF USE: The content of the above press release was provided by the “news source” Sofia Hanan or authorized agency, who is solely responsible for its accuracy. Send2Press® is the originating wire service for this story and content is Copr. © Sofia Hanan with newswire version Copr. © 2015 Send2Press (a service of Neotrope). All trademarks acknowledged. Information is believed accurate, as provided by news source or authorized agency, however is not guaranteed, and you assume all risk for use of any information found herein/hereupon.