"With this gargantuan project, I am exploring the modern world in the best medium ever invented: books," G states. "Albeit books in pixel form."

The unusually-named G is happy to tell people that a lot of the incidents in the omni-novel come straight from a higher or lower source. “Lucifer is the main narrator of ‘Area Code 666,'” G says satirically, “and at heart it is the devil’s search for God. There will be an apocalyptic reunion scene, I promise.”

As the book’s promotion states, “Lucifer narrates a twisted tale of subordinate devils who come to earth to observe, infiltrate, tempt, meddle, and wreak havoc.” Many chapters are reports from Satan’s entities as they infiltrate every aspect of society from boardrooms to bedrooms, from church pulpits to political rallies, and from cozy homes to clandestine cult meetings.

One of the books deals with the birth of computer fraud. Another is a tale of a scientist who discovers a truth serum and sets out to place it in the water supply of the country. Yet another story is of a serial killer with second sight who begins helping the cops solve other crimes.

“With this gargantuan project, I am exploring the modern world in the best medium ever invented: books,” G states. “Albeit books in pixel form.”

There are 666 chapters planned for the book and 192 of them are live and available online as of Feb. 1, 2016. “Six chapters appear each month on Ga-Ga, which is not to be confused with Lady Gaga,” G notes. Artwork, music tracks, and music videos from FookMovie accompany many of the chapters.

For more information, the Table of Contents for “Area Code 666” may be accessed at: http://johnscottg.com/area_CHAPTERS.htm — or start with chapter one directly, at (caution, mature content): http://ga-ga.com/fiction-area-code-666/.

Note to editors: the fictional tales of “Area Code 666” do not promote devil worship, Satanism, or similar nonsense, but follow the classic tropes of good vs. evil, and the fact that evil doesn’t always have visible horns. 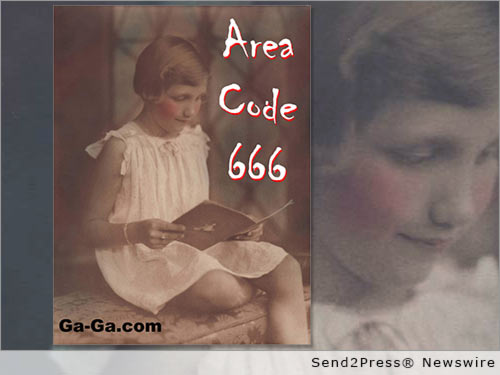 NEWS ARCHIVE NOTE: this archival news content, issued by the news source via Send2Press Newswire, was originally located in the Send2Press® 2004-2015 2.0 news platform and has been permanently converted/moved (and redirected) into our 3.0 platform. Also note the story “reads” counter (bottom of page) does not include any data prior to Oct. 30, 2016. This press release was originally published/issued: Fri, 05 Feb 2016 16:56:56 +0000

View More Books and Publishing News
"With this gargantuan project, I am exploring the modern world in the best medium ever invented: books," G states. "Albeit books in pixel form."

LEGAL NOTICE AND TERMS OF USE: The content of the above press release was provided by the “news source” John Scott G or authorized agency, who is solely responsible for its accuracy. Send2Press® is the originating wire service for this story and content is Copr. © John Scott G with newswire version Copr. © 2016 Send2Press (a service of Neotrope). All trademarks acknowledged. Information is believed accurate, as provided by news source or authorized agency, however is not guaranteed, and you assume all risk for use of any information found herein/hereupon.