ELGIN, Ariz., Jan. 2, 2014 (SEND2PRESS NEWSWIRE) — Four Monkey Winery will be pouring its award winning Naughty and Playful Monkey wines (Moscato and Cabernet) to the Hollywood Elite at the Broadcast Film Critics Association’s Celebration of Black Cinema at the House of Blues on Tuesday, January 7, 2014 in Hollywood, Calif. This marks the winery’s second foray into the Hollywood scene. The first was the 2013 BET Awards in Beverly Hills during the summer.

Four Monkey Winery is one of the winery brands that are owned by Domaines Ellam, Inc, based out of Elgin, Arizona in the Sonoita American Viticultural Area. The winery focuses on superbly balanced and aged single varietals.

Three members of the winery will be present for the invitation only backstage event at the House of Blues. It is anticipated that 75 A-list celebrities will be in attendance for the event. 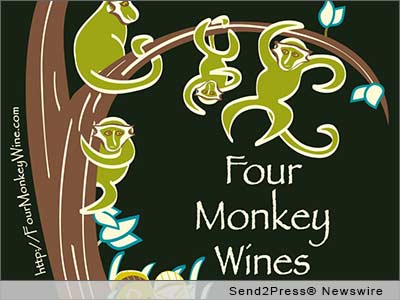 NEWS ARCHIVE NOTE: this archival news content, issued by the news source via Send2Press Newswire, was originally located in the Send2Press® 2004-2015 2.0 news platform and has been permanently converted/moved (and redirected) into our 3.0 platform. Also note the story “reads” counter (bottom of page) does not include any data prior to Oct. 30, 2016. This press release was originally published/issued: Thu, 02 Jan 2014 13:26:40 +0000

LEGAL NOTICE AND TERMS OF USE: The content of the above press release was provided by the “news source” Four Monkey Winery or authorized agency, who is solely responsible for its accuracy. Send2Press® is the originating wire service for this story and content is Copr. © Four Monkey Winery with newswire version Copr. © 2014 Send2Press (a service of Neotrope). All trademarks acknowledged. Information is believed accurate, as provided by news source or authorized agency, however is not guaranteed, and you assume all risk for use of any information found herein/hereupon.