“We are pleased once again to be able to provide financial support to the Arkansas Medical Foundation to assist them in continuing this vital public service. Our mission as a company is to support Arkansas physicians by protecting their practice and this effort is an extension of our dedication to Arkansas physicians,” said Corey Little, President and CEO of Arkansas Mutual Insurance company. “This is the third year that we have donated to the fund and we see this donation as a critical piece of our corporate responsibility to the medical community.”

The Arkansas Medical Foundation was formed in 1983 to provide confidential treatment and follow-up monitoring for physicians struggling with impairment, and to promote public health and safety by insuring the continued availability of skilled and highly trained medical professionals for the benefit of the public.

“The Arkansas Medical Foundation is appreciative of Arkansas Mutual Insurance Company for its thoughtful and generous contribution to the cause of the Foundation to maintain the health and safety of all healthcare providers. With this program a cascade of events occurs that benefits all of Arkansas. The beneficiaries are often the providers, the families, the hospitals, the insurers, and most importantly the public. With the help of our supporters like Arkansas Mutual, these positive events will continue,” said Dr. Larry Lawson, Executive Director of the Arkansas Medical Foundation. 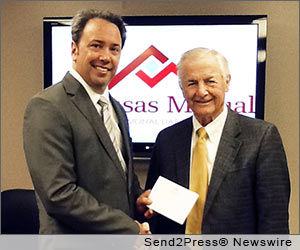 NEWS ARCHIVE NOTE: this archival news content, issued by the news source via Send2Press Newswire, was originally located in the Send2Press® 2004-2015 2.0 news platform and has been permanently converted/moved (and redirected) into our 3.0 platform. Also note the story “reads” counter (bottom of page) does not include any data prior to Oct. 30, 2016. This press release was originally published/issued: Mon, 11 Feb 2013 15:14:21 +0000

View More Arkansas Business News
"Our mission as a company is to support Arkansas physicians by protecting their practice and this effort is an extension of our dedication to Arkansas physicians," said Corey Little, CEO of Arkansas Mutual Insurance.

LEGAL NOTICE AND TERMS OF USE: The content of the above press release was provided by the “news source” Arkansas Mutual Insurance Company or authorized agency, who is solely responsible for its accuracy. Send2Press® is the originating wire service for this story and content is Copr. © Arkansas Mutual Insurance Company with newswire version Copr. © 2013 Send2Press (a service of Neotrope). All trademarks acknowledged. Information is believed accurate, as provided by news source or authorized agency, however is not guaranteed, and you assume all risk for use of any information found herein/hereupon.