In signing with ArteQuesta, Koren stated, "I'm very excited and looking forward to a fruitful collaboration. Through my photography, I'd rather be honest than impressive."

Levy adds, “Ziv is often on the front-lines, capturing history; telling the true story of what is happening through his lens. He is a brilliant photographer who often has exclusive access to restricted sites. Although Ziv is a well-known feature throughout Europe, Asia and the Middle East, we are honored to introduce him further to the Western part of the world.”

Koren, a freelance photographer since 1992, is currently affiliated with Polaris Images and has been a Canon Ambassador since 2008. Perhaps best known for his award-winning 2003 project “Louai Mer’i, a sergeant, is going home,” documenting an injured solider, he recently unveiled an acclaimed “Writing with Light” exhibition at the Tel-Aviv Exhibition Grounds, which is now touring the far east.

In 2000 one of Koren’s images was chosen by World Press Photo as one of the 200 Best Pictures from the Previous 45 Years. He’s won numerous awards including World Press Photo and Photo District News awards, Yann Geffroy Award, International Color Award and Picture of the Year.

Koren has published 15 books and has covered the Israeli-Arab conflict, Tsunamis, the Haiti earthquake, Nepal earthquake, Guantanamo Prison, and AIDS in South Africa, among other critical moments in history. His photographs have been published in Time, Newsweek, and Wired, among many others. Koren’s photographs have been included in numerous exhibitions worldwide including the Metropolitan Museum of Tokyo, Memorial Museum in Spain, War Museum in Croatia, National Museum of Arts in Rome, and The Israel Museum. Koren also lectures around the world.

In signing with ArteQuesta, Koren stated, “I’m very excited and looking forward to a fruitful collaboration. Through my photography, I’d rather be honest than impressive.”

As part of its mission, ArteQuesta fights to preserve Jewish and Israeli art. Levy believes that signing Koren strengthens this mission: “To watch history unfold through a photograph is not only moving, but priceless. What better way for an artist like Ziv Koren who specializes in this, who is an Israeli native, to bring forth this time period in our collective history than through his powerful images.”

* Photo Caption: Jerusalem, Israel, Aug. 2004, by Ziv Koren. The Western Wall and the golden Dome on the Temple Mount, at the old city of Jerusalem. 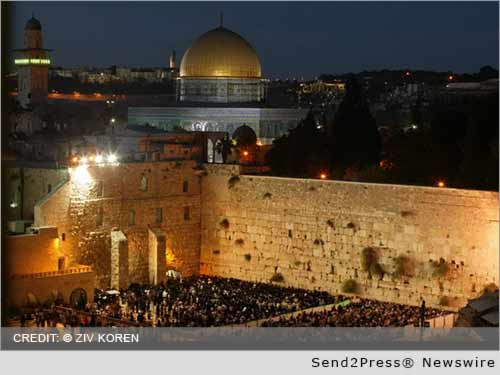 NEWS ARCHIVE NOTE: this archival news content, issued by the news source via Send2Press Newswire, was originally located in the Send2Press® 2004-2015 2.0 news platform and has been permanently converted/moved (and redirected) into our 3.0 platform. Also note the story “reads” counter (bottom of page) does not include any data prior to Oct. 30, 2016. This press release was originally published/issued: Wed, 02 Dec 2015 07:00:56 +0000

View More California Business News
In signing with ArteQuesta, Koren stated, "I'm very excited and looking forward to a fruitful collaboration. Through my photography, I'd rather be honest than impressive."

ABOUT THE NEWS SOURCE:
ArteQuesta

LEGAL NOTICE AND TERMS OF USE: The content of the above press release was provided by the “news source” ArteQuesta or authorized agency, who is solely responsible for its accuracy. Send2Press® is the originating wire service for this story and content is Copr. © ArteQuesta with newswire version Copr. © 2015 Send2Press (a service of Neotrope). All trademarks acknowledged. Information is believed accurate, as provided by news source or authorized agency, however is not guaranteed, and you assume all risk for use of any information found herein/hereupon.