In “Fire on the Bayou,” a federal hate crimes prosecutor takes the reader inside the grand juries, courtrooms, and killing fields of the Deep South, where, as native son William Faulkner put it, “The past is never dead. It’s not even past.”

“Fire on the Bayou” is an emotionally-candid, self-effacing and plain-spoken account in which Howard Feinstein tells true tales that harken from a time many would rather forget. Secrets once thought buried forever resurface in this engaging memoir of a young attorney thrust “behind the lines” into a cauldron of hate and violence.

Feinstein’s book launch event on the 12th is sponsored by Empowered Women International, an organization who in the author’s words is “a wonderful nonprofit which continues the struggle for dignity and equality.”

Following Sunday’s book launch, Feinstein has scheduled an extensive east coast book tour with stops in New York, Maryland, North Carolina, Virginia and the District of Columbia. Fans of Feinstein will find these promotional events, “classic Howard” as they embody an eclectic mix of literature, music and poignant conversation.

Copies of “Fire on the Bayou: True Tales from the Civil Rights Battlefront” can be found at online retailers as well as direct from Foxhead Books ( http://foxheadbooks.com/ ).

About Howard Feinstein:
Howard L. Feinstein is the author of “Developing Issues in the Legal Status of Women: Cases and Commentaries,” published by Pearson [Prentice Hall], 1999. A supplement to the first edition was published in 2000. His memoir, “Fire on the Bayou: True Tales from the Civil Rights Battlefront,” details Mr. Feinstein’s civil rights work prosecuting Ku Klux Klan cases and other prosecutions involving racially-motivated violence.

About Foxhead Books:
Foxhead Books publishes in the traditional, e-book, and fine books markets. Foxhead believes there’s a place for genre and pop-fiction-in fact, we’ll publish anything we want, without hesitation, when the spirit moves us. Foxhead Books is an independent book publisher and a division of Potemkin Media Omnibus, Ltd. an Ohio Limited Liability Company. 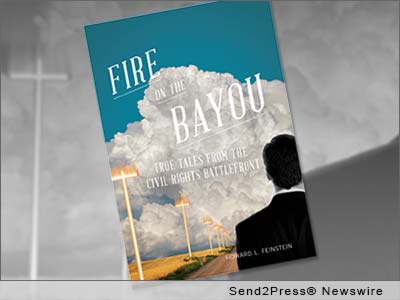 Alternate Headline: New book ‘Fire On The Bayou’ is a stunning memoir detailing hate and violence in the Deep South

NEWS ARCHIVE NOTE: this archival news content, issued by the news source via Send2Press Newswire, was originally located in the Send2Press® 2004-2015 2.0 news platform and has been permanently converted/moved (and redirected) into our 3.0 platform. Also note the story “reads” counter (bottom of page) does not include any data prior to Oct. 30, 2016. This press release was originally published/issued: Fri, 10 Jan 2014 15:50:56 +0000

ABOUT THE NEWS SOURCE:
Howard Feinstein

LEGAL NOTICE AND TERMS OF USE: The content of the above press release was provided by the “news source” Howard Feinstein or authorized agency, who is solely responsible for its accuracy. Send2Press® is the originating wire service for this story and content is Copr. © Howard Feinstein with newswire version Copr. © 2014 Send2Press (a service of Neotrope). All trademarks acknowledged. Information is believed accurate, as provided by news source or authorized agency, however is not guaranteed, and you assume all risk for use of any information found herein/hereupon.