"The end analysis is that sustainable nuclear fusion cannot be established with current engineering methods," author Prendivoj says. "My new law may shed some light on the fusion problem."

For example, he poses why nuclear fusion won’t work in a magnetic reactor like the tokamak. He then goes on to create “Prendivoj’s Law” which states: A magnetic field (regardless of field strength) cannot hold a plasma at or beyond its fusion temperature. It’s the law. He offers a solution that may surprise some.

“The end analysis is that sustainable nuclear fusion cannot be established with current engineering methods,” Prendivoj says. “My new law may shed some light on the fusion problem.”

Among many other ideas and concepts, he touches on the mysterious and popular roadside tourist attraction – the Oregon Vortex and attempts to explain the theory. He also dives into the “Faster than Light” theories of quantum mechanics.

Composed of the author’s scientific notes, the book addresses how it may be possible to achieve such things as spacedrive, warpdrive and free energy with some well-derived explanations.

“Spacedrive, Warpdrive, Free Energy and Other Ideas” is currently available in paperback and for the Kindle on Amazon at: http://amzn.to/1gB37pP.

About the Author:
Tom Prendivoj is a Toronto-based “self taught amateur scientist.” This is his first book. Fascinated by scientific principles, he enjoys explaining complicated concepts in laymen’s terms. He says that this book is written to appeal to a wide audience – basically anyone who is curious and seeks knowledge.

“I was prompted to share my thoughts,” he says. “I hope it sparks some discussions.” 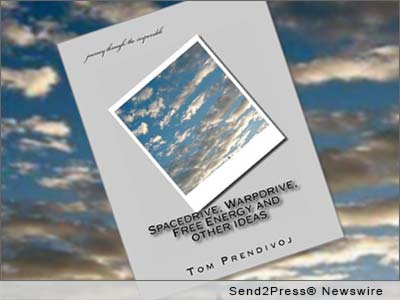 NEWS ARCHIVE NOTE: this archival news content, issued by the news source via Send2Press Newswire, was originally located in the Send2Press® 2004-2015 2.0 news platform and has been permanently converted/moved (and redirected) into our 3.0 platform. Also note the story “reads” counter (bottom of page) does not include any data prior to Oct. 30, 2016. This press release was originally published/issued: Tue, 14 Jan 2014 06:59:20 +0000

View More Aerospace and Aviation News
"The end analysis is that sustainable nuclear fusion cannot be established with current engineering methods," author Prendivoj says. "My new law may shed some light on the fusion problem."

ABOUT THE NEWS SOURCE:
Tom Prendivoj

LEGAL NOTICE AND TERMS OF USE: The content of the above press release was provided by the “news source” Tom Prendivoj or authorized agency, who is solely responsible for its accuracy. Send2Press® is the originating wire service for this story and content is Copr. © Tom Prendivoj with newswire version Copr. © 2014 Send2Press (a service of Neotrope). All trademarks acknowledged. Information is believed accurate, as provided by news source or authorized agency, however is not guaranteed, and you assume all risk for use of any information found herein/hereupon.