"After George Zimmerman was found not guilty of manslaughter charges in the killing of Trayvon Martin, President Obama asked Americans to have thoughtful conversations about race and its impact on our lives," noted Robin Parker, the executive director of the Beyond Diversity Resource Center.

“After George Zimmerman was found not guilty of manslaughter charges in the killing of Trayvon Martin, President Obama asked Americans to have thoughtful conversations about race and its impact on our lives,” noted Robin Parker, the executive director of the Beyond Diversity Resource Center. “In response, the Center thought it was important to offer supplemental questions to our 2005 publication, ‘The Anti-Racist Cookbook: A Recipe Guide for Conversations about Race That Goes beyond Covered Dishes and Kum-Bah-Ya.’ The questions in the Supplement focus on implicit bias and personal safety, two areas where racial dialogue is especially needed.”

The introduction to the supplement states, “Today, people of color have less to fear from the overt actions of a Ku-Klux-Klan lynch mob than from the implicit bias of a gun-carrying member of a neighborhood watch. Yet, the result may be the same.”

In 2005, the Center published “The Anti-Racist Cookbook” to inspire ordinary people in their communities to have conversations about race in America.

But Parker says conversations about race may be even more necessary now than they were when the book was published: “We’ve made progress on race, but racial issues still fester today. From Imus’ shocking comment about the Rutgers women’s basketball team to Riley Cooper’s and Michael Richards’ use of the N-word, we seem to be experiencing a time when individuals feel justified in making negative racial comments and blaming any damage those comments cause on people who are ‘too sensitive’ or who ‘take the comments the wrong way.'”

According to Parker, these acts are examples of what happens when implicit bias-the unconscious bias people have-comes to the surface, often at times of anger, frustration and fear. Implicit bias, if unaddressed, can be as damaging as overt acts of racism.

“We saw implicit bias played out when the ‘dangerous-young-black-man-wearing-a-hoodie’ stereotype came to national attention after the shooting of Trayvon Martin,” Parker remarked. “Studies like the Harvard’s ‘Project Implicit’ show that Americans have implicit biases against blacks and other marginalized groups. Because the Trayvon Martin incident shows how implicit bias can have fatal consequences, many people of color-especially young people of color-feel unsafe. We need to have dialogue among ordinary people to begin to heal these problems.”

The 2013 Supplement asks questions about current racial issues that include: (1) how people can address their own racial biases, (2) what organizations can do to combat implicit bias, (3) whether people feel safe in light of recent racial incidents, and (4) how we should craft solutions for racial healing. The supplement is now available to people who order “The Anti-Racist Cookbook” from the publisher, Crandall, Dostie & Douglass Books.

The Beyond Diversity Resource Center is a 501(c)3 nonprofit organization that works to build a society that sincerely honors individuals because of their cultural differences. The Center provides comprehensive training and education for those who work together to improve the quality of interactions among persons who are different from one another. More information: http://www.beyonddiversity.org/. 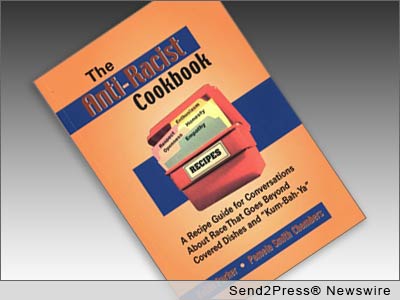 Alternate Headline: New supplement to ‘The Anti-Racist Cookbook’ announced by The Beyond Diversity Resource Center

NEWS ARCHIVE NOTE: this archival news content, issued by the news source via Send2Press Newswire, was originally located in the Send2Press® 2004-2015 2.0 news platform and has been permanently converted/moved (and redirected) into our 3.0 platform. Also note the story “reads” counter (bottom of page) does not include any data prior to Oct. 30, 2016. This press release was originally published/issued: Wed, 18 Sep 2013 08:00:47 +0000

View More African American Interest News
"After George Zimmerman was found not guilty of manslaughter charges in the killing of Trayvon Martin, President Obama asked Americans to have thoughtful conversations about race and its impact on our lives," noted Robin Parker, the executive director of the Beyond Diversity Resource Center.

More from Beyond Diversity Resource Center

ABOUT THE NEWS SOURCE:
Beyond Diversity Resource Center

LEGAL NOTICE AND TERMS OF USE: The content of the above press release was provided by the “news source” Beyond Diversity Resource Center or authorized agency, who is solely responsible for its accuracy. Send2Press® is the originating wire service for this story and content is Copr. © Beyond Diversity Resource Center with newswire version Copr. © 2013 Send2Press (a service of Neotrope). All trademarks acknowledged. Information is believed accurate, as provided by news source or authorized agency, however is not guaranteed, and you assume all risk for use of any information found herein/hereupon.