“Porters are a good fit for long, cold winters like the ones we have in Wisconsin. While all of our beers are meant to be enjoyed year-round, we wanted to offer a distinctive, hearty beer that’s well-suited for the coldest months,” said Jeff Garwood, Big Bay Brewing Co. co-founder and managing partner. “Portside is a perfect complement to winter festivities – whether it’s a holiday gathering with family and friends, a ski weekend up north, or a relaxing evening by the fire,” added Garwood.

Porters, known for their dark color and slight sweetness, originated in 18th Century London when it was common to experiment with combinations of various beer styles. According to legend, a particular combination became popular with the porters around Victoria Station who began drinking it as a lunchtime meal. A local brewer took notice and began brewing and distributing that specific combination (*NOTE: 1).

Like its British ancestors, Big Bay Brewing’s Portside features an aromatic malt flavor with hints of chocolate, toffee and coffee, and a deep brown color. It’s a well-balanced, drinkable brown porter for those who appreciate the carefully crafted combination of sweet roasted malt notes and East Kent Golding hops.

“We know that craft beer drinkers actively seek out new flavor profiles and our limited edition beers allow us to meet the needs of craft beer consumers with various beer styles throughout the year. Our distinctive Portside brown porter is a great addition to our Big Bay Brewing family for craft beer drinkers looking for a bit maltier beer during winter,” said Garwood.

Developed from unique and exclusive recipes that feature proprietary yeast and the highest quality ingredients, Big Bay Brewing beers offer the distinctiveness of Wisconsin’s microbrews with a clean finish. They’re brewed slowly and methodically resulting in a well-balanced, robust, drinking experience. The company has relationships with multiple brewing partners. 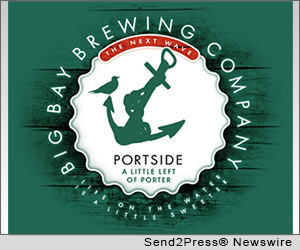 NEWS ARCHIVE NOTE: this archival news content, issued by the news source via Send2Press Newswire, was originally located in the Send2Press® 2004-2015 2.0 news platform and has been permanently converted/moved (and redirected) into our 3.0 platform. Also note the story “reads” counter (bottom of page) does not include any data prior to Oct. 30, 2016. This press release was originally published/issued: Fri, 21 Dec 2012 13:54:49 +0000

LEGAL NOTICE AND TERMS OF USE: The content of the above press release was provided by the “news source” Big Bay Brewing Company or authorized agency, who is solely responsible for its accuracy. Send2Press® is the originating wire service for this story and content is Copr. © Big Bay Brewing Company with newswire version Copr. © 2012 Send2Press (a service of Neotrope). All trademarks acknowledged. Information is believed accurate, as provided by news source or authorized agency, however is not guaranteed, and you assume all risk for use of any information found herein/hereupon.