"It is so exciting to be able to play in this band," says lead vocalist John Dellroy, "especially the way the guys can blend hard rock with electronica, intricate vocal harmonies, and even a touch of country now and then."

LOS ANGELES, Calif., July 1, 2014 (SEND2PRESS NEWSWIRE) — When the John Dellroy Band cranks it up on stage, audiences are treated to a melodic onslaught. “We rock, but with folk and electronic influences, and the melodies are designed to let you hum along immediately and even sing with us after you hear the hook just a couple of times,” states lead vocalist John Dellroy.

Calling their sound “alternative folk-rock without limits,” the John Dellroy Band is unafraid to go from hard-charging rock to a reflective ballad while zooming through a set-list that contains numbers featuring a full range of modern pop styles.

“It is so exciting to be able to play in this band,” Dellroy states, “especially the way the guys can blend hard rock with electronica, intricate vocal harmonies, and even a touch of country now and then.” Their sound has been described as a combination of “intimate and gritty.” On their recent European tour, the band performed rock and acoustic sets, depending on the venue.

Their first full-length CD, “A New Life Has Begun,” was released in 2013 on Poolman Records. The 11-track album was produced by Thomas Mora and has seen a radio edit of “Time” achieve very strong download action, including reaching #1 at Musicload and #55 on the iTunes Pop chart.

Theirs is a total commitment to music. As Dellroy states, “Life without music is an empty, soulless place.” In addition to touring in support of the album and single releases, the band is working with producer Peter Roberts to launch new singles into the North American market.

ABOUT THE JOHN DELLROY BAND:

Peter Roberts is a multiple award winning songwriter and producer who has received Grammy® nominations for “Song of the Year,” “Album Of The Year,” “Record Of The Year,” “Best Song written for a Motion Picture Soundtrack,” and “Best Female Pop Vocal Performance.”

Visit the band online at http://www.johndellroy.com/ where you’ll find music to download, a bio, photographs, videos, and the band’s tour schedule.

YouTube Video of ‘A New Life has Begun’: http://youtu.be/K98bbHYXtjI.

*PHOTO: Send2Press.com/wire/images/14-0701-JohnDellroyBand_300dpi.jpg .
*PHOTO Caption: John Dellroy Band is on a multi-national tour with their blend of rock, folk, and folktronica. Photo by Thomas Benesch. 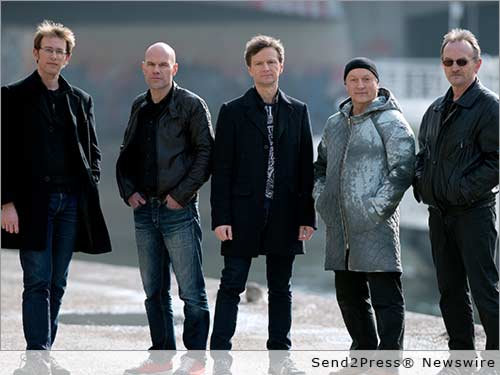 NEWS ARCHIVE NOTE: this archival news content, issued by the news source via Send2Press Newswire, was originally located in the Send2Press® 2004-2015 2.0 news platform and has been permanently converted/moved (and redirected) into our 3.0 platform. Also note the story “reads” counter (bottom of page) does not include any data prior to Oct. 30, 2016. This press release was originally published/issued: Tue, 01 Jul 2014 19:01:40 +0000

View More California Business News
"It is so exciting to be able to play in this band," says lead vocalist John Dellroy, "especially the way the guys can blend hard rock with electronica, intricate vocal harmonies, and even a touch of country now and then."

LEGAL NOTICE AND TERMS OF USE: The content of the above press release was provided by the “news source” John Dellroy Band or authorized agency, who is solely responsible for its accuracy. Send2Press® is the originating wire service for this story and content is Copr. © John Dellroy Band with newswire version Copr. © 2014 Send2Press (a service of Neotrope). All trademarks acknowledged. Information is believed accurate, as provided by news source or authorized agency, however is not guaranteed, and you assume all risk for use of any information found herein/hereupon.