"For the translations for Genesis 1 that enabled us to accomplish the breakthroughs, we used the words as per their meanings in the Biblical Hebrew at the time of the Exodus," says Professor Huriash.

FT. LAUDERDALE, Fla., Sept. 2, 2014 (SEND2PRESS NEWSWIRE) — “Science Proving Creationism” (ISBN: 9780961809850), by Professor Solomon Huriash, is the only book of its kind on the market that literally proves each and every verse of the Biblical story of creation is in sync with the teachings of modern science. Published by Land Publishing Corporation, a project like this has never been done before.

“For the translations for Genesis 1 that enabled us to accomplish the breakthroughs, we used the words as per their meanings in the Biblical Hebrew at the time of the Exodus,” says Huriash.

QUERY: How was it humanly possible for Moses, 3500 years ago, to have known of every basic detail of the creation story, and in their exact chronological order, when modern science is only now within the last 75 years beginning to figure it out?

That question is answered as we complete reading chapter 1 and realize we now have a rationale for belief that requires no blind faith. There are other myriads of ramifications for those findings that would include bringing us all closer together to fighting anti-Semitism.

While those findings should bring joy to theologians, both Christians and Jews, they have a problem, only academic, because we also showed the Biblical proof in chapter 2 that Adam was not the first man created (although he was the first man to know the Lord), and the world is not 6000 years old. This is a blow to Young Earth theorists.

Chapter 2 also destroys many erroneous impressions of the reading of the Garden of Eden story as we noted that people never wore clothing of fig leaves and the wearing of clothing of leaves was only a metaphoric expression for offering a poor excuse (which Adam and Eve did after confronted for eating of the forbidden tree). Adam and Eve were not forgiven and had to leave Utopia because they would not accept full responsibility in their contrition offerings as they blamed others.

Other chapters deal with Biblical enigmas and address the question of who should control the “Promised Land.” Readers will be surprised to learn the Muslim Koran directs that the “Promised Land” is to be had by the Children of Israel.

Chapter 11 exposes the misleading concept of beauty and truth of the art form icon of the Ten Commandments encased in two round-topped connected stones. The two round-topped stones were intended to depict tombstones as that art form was created by English artists in the 11th century to make their case that the laws of the Jews were dead. Evidence of that period of history and how Jews were made to wear a picture of that symbol on their clothing in public are presented in detail.

The website http://www.landpublishing.com/ provides details of the content of other chapters; and a following can be found on https://www.facebook.com/LandPublishingCorp.

The new book, “SCIENCE PROVING CREATIONISM” (ISBN: 9780961809850; Land Publishing Corporation) can be ordered directly from the website or from Barnes & Noble. 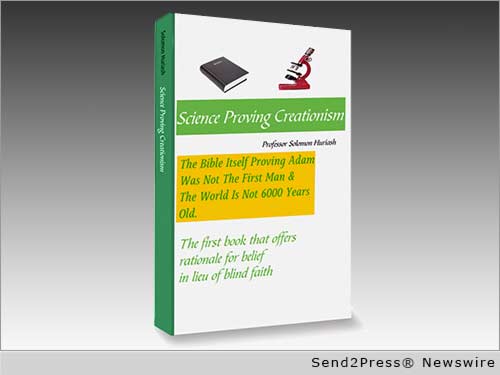 NEWS ARCHIVE NOTE: this archival news content, issued by the news source via Send2Press Newswire, was originally located in the Send2Press® 2004-2015 2.0 news platform and has been permanently converted/moved (and redirected) into our 3.0 platform. Also note the story “reads” counter (bottom of page) does not include any data prior to Oct. 30, 2016. This press release was originally published/issued: Tue, 02 Sep 2014 07:00:28 +0000

View More Books and Publishing News
"For the translations for Genesis 1 that enabled us to accomplish the breakthroughs, we used the words as per their meanings in the Biblical Hebrew at the time of the Exodus," says Professor Huriash.

LEGAL NOTICE AND TERMS OF USE: The content of the above press release was provided by the “news source” Land Publishing Corporation or authorized agency, who is solely responsible for its accuracy. Send2Press® is the originating wire service for this story and content is Copr. © Land Publishing Corporation with newswire version Copr. © 2014 Send2Press (a service of Neotrope). All trademarks acknowledged. Information is believed accurate, as provided by news source or authorized agency, however is not guaranteed, and you assume all risk for use of any information found herein/hereupon.