"Twenty-three states and the nation's capital, Washington D.C. have legalized the use of cannabis in some form or fashion," cites Attorney John Vincent Saykanic. "But we still have an uphill battle to go."

Forchion’s legal team filed a Petition for Writ of Certiorari to the U.S. Supreme Court (US Supreme Court Docket – 15-8533) on March 8, 2016, presenting ten questions for review and response from the Court.

Per the subject of race and religion, as it relates to cannabis, the filing marks a landmark stance in the marijuana movement. Forchion considers the petition a direct challenge to recently revealed comments by former Nixon domestic policy chief, John Ehrlichman, that the war on drugs was a political assault against blacks and hippies ( http://tinyurl.com/http-www-cnn-com-2016-03-23 ).

The document leads with its most powerful query, directly asking the presiding judges, “Are New Jersey’s drug laws inherently discriminatory against African Americans and discriminatory as applied by law enforcement?”

In addition, the other questions presented to the Court include:

2. Has New Jersey decided an important federal question in a way that conflicts with other state courts of last resort as petitioner was precluded from arguing to the jury by way of nullification that marijuana should not be a substance proscribed by New Jersey as part of his defense at trial?

3. Is a state court of last resort in hopeless conflict with the United States Court of Appeals concerning First Amendment Free Exercise Clause as it relates to the right to use marijuana as a religious sacrament?

4. Does New Jersey’s criminalization of marijuana deprive Rastafarians of their sacramental use of cannabis in violation of the Religious Freedom Restoration Act?

“Twenty-three states and the nation’s capital, Washington D.C. have legalized the use of cannabis in some form or fashion,” cites Attorney John Vincent Saykanic. “But we still have an uphill battle to go. While marijuana has received more mainstream recognition and acceptance over the years, and has now evolved into a multi-million dollar legal industry in some parts of the country, a disproportionate number of people of color are sadly sitting in jail cells serving quite frankly, ridiculous and unfair sentences. I have worked tirelessly with Forchion over the years because I believe his legal battles serve the greater interest of many. This U.S. Supreme Court filing is perhaps one of our loudest legal statements yet.”

“I’ve always known the marijuana laws are racist and I’ve always thought of marijuana legalization as a civil rights issue,” expresses Forchion. “States throughout the South began implementing drug laws as part of the explicitly racist Jim Crow system, with Southern lawmakers being quite open about the racist motivations behind the laws. Northern states such as New Jersey stripped offensive racist language from their official legal statements, but their anti-drug policies were hardly less racist.”

Forchion is encouraged by U.S. Supreme Court Justice Sonia Sotomayor’s recent endorsement of jury nullification (see http://goo.gl/YA5zOS ) and further argues that, “all marijuana defendants should be allowed to present these facts to jurors and encourage nullification verdicts.”

Forchion’s long standing battle for marijuana law reform has been documented for over two decades. Considered by many as the “grandfather of marijuana reform in New Jersey,” Forchion is a bone cancer patient who states he needs marijuana for his symptoms.

Amongst his many trials and tribulations, Forchion pleaded guilty in 2000 to charges of conspiracy to distribute and marijuana possession and was released on parole after serving 18 months on a reduced sentence. He was arrested again in Burlington County, N.J., in 2010 on marijuana possession and distribution charges. He has fought those charges. Forchion argued his medical condition gave him a “medical necessity” defense to possess and appealed the decision to the N.J. Supreme Court and now the U.S. Supreme Court.

Forchion achieved Hollywood notoriety when he opened a marijuana dispensary in Los Angeles in 2008, saying it was a temple that used marijuana as part of its religious ceremonies. The California temple was shut down after a federal drug raid in 2011.

Currently Forchion, a Rastafarian, is the owner of his own restaurant, NJWeedman’s Joint and spiritual sanctuary, Liberty Bell Temple III, which he opened last year directly across from New Jersey’s Trenton City Hall. The restaurant and sanctuary receive not only a steady stream of customers but also international media attention.

Read more about Forchion’s stance for marijuana reform in the Trentonian at http://goo.gl/fAkLsU. 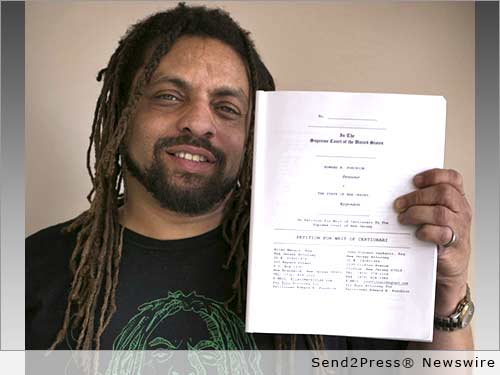 NEWS ARCHIVE NOTE: this archival news content, issued by the news source via Send2Press Newswire, was originally located in the Send2Press® 2004-2015 2.0 news platform and has been permanently converted/moved (and redirected) into our 3.0 platform. Also note the story “reads” counter (bottom of page) does not include any data prior to Oct. 30, 2016. This press release was originally published/issued: Tue, 05 Apr 2016 09:00:42 +0000

View More General Editorial News
"Twenty-three states and the nation's capital, Washington D.C. have legalized the use of cannabis in some form or fashion," cites Attorney John Vincent Saykanic. "But we still have an uphill battle to go."

LEGAL NOTICE AND TERMS OF USE: The content of the above press release was provided by the “news source” Ed Forchion or authorized agency, who is solely responsible for its accuracy. Send2Press® is the originating wire service for this story and content is Copr. © Ed Forchion with newswire version Copr. © 2016 Send2Press (a service of Neotrope). All trademarks acknowledged. Information is believed accurate, as provided by news source or authorized agency, however is not guaranteed, and you assume all risk for use of any information found herein/hereupon.