"I recorded the EP in my friend Donnie Reis' studio called Twelve3South," Caroline Glaser explains. "We got pretty experimental in the studio, so each track has a pretty different vibe. I was definitely more involved in this recording process, compared to 'Vol. 1,' so I'm a little more proud of this one."

TIPP CITY, Ohio, Sept. 12, 2014 (SEND2PRESS NEWSWIRE) — When Caroline Glaser became a fan favorite on Season 4 of NBC’s “The Voice,” it was just the first step of many she hoped to take on a long, successful road in the indie music world. Now, two years on from the show, the young singer-songwriter from Saint Louis, Mo., will be releasing her second EP, “Better Days. Vol. 2” on September 16.

In a recent interview with Starpulse.com, Glaser talked about the increased level of participation she had as an artist in shaping the sound of “Better Days.”

“I recorded the EP in my friend Donnie Reis’ studio called Twelve3South,” she explained. “We got pretty experimental in the studio, so each track has a pretty different vibe. I was definitely more involved in this recording process, compared to ‘Vol. 1,’ so I’m a little more proud of this one.”

Her producer, Reis, is a Billboard-chart performer and recording artist in his own right, and had this to say about the talented young vocalist: “Caroline has come up with some real heartfelt tunes on this new release. I love working with her, as her vocals harmonize as easily with the guitar as they do with the cuts that include larger orchestrations. Her fans are gonna love it.”

Fans of Caroline Glaser and “The Voice” will be able to pick up the EP “Better Days, Vol. 2” this Tuesday, September 16, 2014, on both Amazon.com and iTunes, as well as at other online retailers nationwide.

“Chart Topping Smash Hits” is the mission statement for Twelve3south, and the upstart studio in Tipp City, Ohio has most recently lived up to their goal by having a #3 tune on the Billboard Soundtrack Charts (#47 on the Billboard top 200) for Reis’ violin contributions to Amy Lee’s and Dave Eggar’s film soundtrack for “War Story: Aftermath.”

In addition to his collaboration with Eggar – who has written strings for the likes of Coldplay, Beyonce, and Taylor Swift – Reis has recently concluded recording projects for country artist Jonathan Jackson of the ABC hit show “Nashville,” as well as finishing an EP for The Misses & Me, a duo comprised of two other Season 4 “The Voice” contestants, Christian Porter and Jacqui Sandell. Both recordings are in post-production and are tentatively scheduled for release in October.

Caroline Glaser was a contestant and fan favorite on Season 4 of “The Voice.” Prior to “The Voice,” Caroline was 19 years old and a freshman at the University of Kansas. Today, Caroline can be found touring with the likes of Straight no Chaser, Kris Allen and Us the Duo as well as in the studio recording her second EP entitled “Better Days” that releases September 16, 2014. Visit her website for more info: http://carolineglaser.com/.

Twelve3south is one of the professional music industry’s newest premier recording studios, owned and operated by producer, composer, songwriter, and multi-instrumentalist Donnie Reis. For up-to-date information about recent recording projects, or tour dates for Twelve3South artists, please check out the website at http://www.twelve3south.com/ for more info. 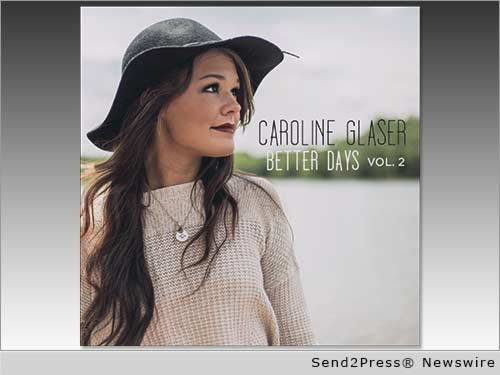 NEWS ARCHIVE NOTE: this archival news content, issued by the news source via Send2Press Newswire, was originally located in the Send2Press® 2004-2015 2.0 news platform and has been permanently converted/moved (and redirected) into our 3.0 platform. Also note the story “reads” counter (bottom of page) does not include any data prior to Oct. 30, 2016. This press release was originally published/issued: Fri, 12 Sep 2014 15:01:59 +0000

View More Entertainment News
"I recorded the EP in my friend Donnie Reis' studio called Twelve3South," Caroline Glaser explains. "We got pretty experimental in the studio, so each track has a pretty different vibe. I was definitely more involved in this recording process, compared to 'Vol. 1,' so I'm a little more proud of this one."

ABOUT THE NEWS SOURCE:
Caroline Glaser

LEGAL NOTICE AND TERMS OF USE: The content of the above press release was provided by the “news source” Caroline Glaser or authorized agency, who is solely responsible for its accuracy. Send2Press® is the originating wire service for this story and content is Copr. © Caroline Glaser with newswire version Copr. © 2014 Send2Press (a service of Neotrope). All trademarks acknowledged. Information is believed accurate, as provided by news source or authorized agency, however is not guaranteed, and you assume all risk for use of any information found herein/hereupon.