The CVTP takes out-of-control federal spending and the continued accumulation of debt very seriously. In June of 2011, the CVTP organized large rallies and a petition drive to deliver the message to congress that “No More Debt” is acceptable.

Earlier this month, October 2013, the CVTP again organized a petition drive to deliver the message that any additional funding for Obamacare is unacceptable.

These commendations and censures represent the CVTP’s follow-through to hold elected representatives accountable, regardless of their party affiliation.

About The Central Valley Tea Party:
The Central Valley Tea Party grew out of a tax day protest in 2009 that drew well over 8,500 attendees. The CVTP (Including Auberry, Mariposa, Fresno, Reedley, Madera, Kings County, Tulare/Visalia and Sanger and Oakhurst/Coarsegold) and its local affiliates now cover over 22,500 square miles and five counties in Central California. In addition to its successful protests, the CVTP also achieved election victories in Fresno and Madera Counties. 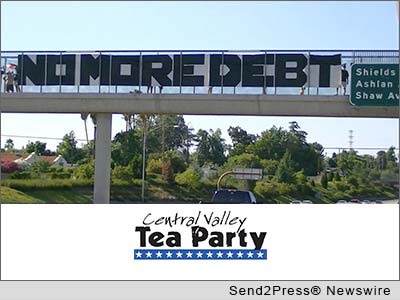 NEWS ARCHIVE NOTE: this archival news content, issued by the news source via Send2Press Newswire, was originally located in the Send2Press® 2004-2015 2.0 news platform and has been permanently converted/moved (and redirected) into our 3.0 platform. Also note the story “reads” counter (bottom of page) does not include any data prior to Oct. 30, 2016. This press release was originally published/issued: Mon, 28 Oct 2013 16:16:23 +0000

LEGAL NOTICE AND TERMS OF USE: The content of the above press release was provided by the “news source” Central Valley Tea Party or authorized agency, who is solely responsible for its accuracy. Send2Press® is the originating wire service for this story and content is Copr. © Central Valley Tea Party with newswire version Copr. © 2013 Send2Press (a service of Neotrope). All trademarks acknowledged. Information is believed accurate, as provided by news source or authorized agency, however is not guaranteed, and you assume all risk for use of any information found herein/hereupon.