CERTUS Professional Network celebrates its 11th Anniversary by hosting its largest network event of the year, benefiting Dolls for Daughters

"It's an amazing chance for Certus to celebrate or 11 years of success in providing the best in Denver's business networking opportunities - and be able to give back our community by support such a worthwhile local charity such as Dolls for Daughters," stated Sabrina Risley, owner and founder of Certus Professional Network. "It will be our largest networking event in 2014 - and will help support a great cause."

DENVER, Colo., Sept. 19, 2014 (SEND2PRESS NEWSWIRE) — Certus Professional Network is hosting its 11th Anniversary Celebration on Tuesday, September 23, at the Denver Athletic Club, and encouraging attendees to bring an unwrapped toy for a boy or girl, or to make a monetary donation benefiting the Dolls for Daughters charitable organization. Sponsored by many Denver businesses, including its headline sponsor, John Dovenbarger of Your Castle Real Estate, this unique networking event celebrates Colorado’s thriving business community on the rooftop of The Denver Athletic Club, in a social yet professional format, with some of the most well-connected leaders and agents of change in Denver and the Front Range.

Starting at 5:30 p.m., Tuesday, September 23, 2014, more than 300 Denver business professionals including the Who’s Who of Denver from many industries will be in attendance to join together in celebrating Certus Professional Network’s ongoing commitment to providing the best in high-caliber networking opportunities, and at the same time, bring the community’s support and exposure to the Dolls for Daughters organization ( http://www.dollsfordaughters.com/ ), a non-profit founded by Colorado native, Jessica Bachus. Tickets and registration for the event are now available online – at http://certus11.ezregister.com – with non-members of Certus Professional Network paying $25 for an advance or pre-paid ticket. Tickets at the door will be sold for $30.

With breathtaking views of Downtown Denver, and hundreds of Denver’s finest professionals networking in a one-of-a kind anniversary celebration, this event is expected to be very well attended, and one of the premier business networking events of the year. It will also be striving to make a difference in the lives of many underprivileged Colorado families and children, by supporting Doll for Daughters in their efforts to provide toys, food and more during the holidays, school supplies and clothing during the school year, and assistance to families through community outreach, financial planning and professional support.

Entertainment and activities for the evening include a DJ spinning tunes, a photo booth, a golf putting green with expert analysis, giant Jenga, professional head shot photography, and additional business exhibits, and door prize giveaways. There will also be a selection of hors d’oerves, and 2 cash bars at the event as well – all on the rooftop of the Denver Athletic Club, in the heart of downtown Denver, located at 1325 Glenarm Place, Denver, CO 80204.

“It’s an amazing chance for Certus to celebrate or 11 years of success in providing the best in Denver’s business networking opportunities – and be able to give back our community by support such a worthwhile local charity such as Dolls for Daughters,” stated Sabrina Risley, owner and founder of Certus Professional Network. “It will be our largest networking event in 2014 – and will help support a great cause.”

About Certus Professional Network:
Certus Professional Network was founded in 2003, and has hosted more than 700 networking events and welcomed 20,000+ professionals to these events. The Denver organization hosts 10 professional events each month, with both members and non-members welcome to attend. The Certus professional community is infused with the belief that when one focuses on GIVING rather than GETTING, business owners and their businesses are led to amazing opportunities. This 11th year anniversary celebration stands as a testament to the organization’s success and close relationship with the Colorado business community.

To learn more about Certus Professional Network, or to join the organization as an active member, you can visit their website directly at http://www.certusnetwork.com/. If you have questions, and would like to speak to someone at Certus, you can reach Laura Bean, Membership Coordinator at 720-439-2499. 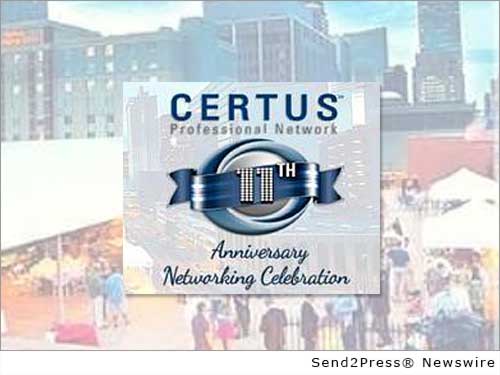 NEWS ARCHIVE NOTE: this archival news content, issued by the news source via Send2Press Newswire, was originally located in the Send2Press® 2004-2015 2.0 news platform and has been permanently converted/moved (and redirected) into our 3.0 platform. Also note the story “reads” counter (bottom of page) does not include any data prior to Oct. 30, 2016. This press release was originally published/issued: Fri, 19 Sep 2014 15:24:23 +0000

View More Business News
"It's an amazing chance for Certus to celebrate or 11 years of success in providing the best in Denver's business networking opportunities - and be able to give back our community by support such a worthwhile local charity such as Dolls for Daughters," stated Sabrina Risley, owner and founder of Certus Professional Network. "It will be our largest networking event in 2014 - and will help support a great cause."

LEGAL NOTICE AND TERMS OF USE: The content of the above press release was provided by the “news source” Certus Professional Network or authorized agency, who is solely responsible for its accuracy. Send2Press® is the originating wire service for this story and content is Copr. © Certus Professional Network with newswire version Copr. © 2014 Send2Press (a service of Neotrope). All trademarks acknowledged. Information is believed accurate, as provided by news source or authorized agency, however is not guaranteed, and you assume all risk for use of any information found herein/hereupon.