PALISADES PARK, N.J., March 7, 2014 (SEND2PRESS NEWSWIRE) — Chillbox Greek frozen yogurt chain of stores is expanding its presence outside Europe, with a strategic partnership with LYMEL HOLDINGS LLC that has acquired the exclusive master franchise for development across the USA. After a rapid expansion in the highly demanding European market, with recent store openings in Russia, Austria and Hungary, Chillbox is now present in over 73 locations in 11 countries. An additional 220 stores are committed to open in 2014-2015.

Chillbox is using high-quality, pure products such as fresh milk and strained yogurt, creating Greek frozen yogurt of high nutritional value, low in calories and in fat. Frozen yogurt is made in 6 delicious flavors – natural, Madagascar vanilla, chocolate, strawberry and mango – which are combined with a large variety of toppings, including delectable sauces, preserves, fruits, and nuts. By mixing many of the flavors, every customer has the opportunity to create their own explosive combination of healthy pleasure!

Chillbox fans enjoy a product menu composed of high quality ice cream in 14 different flavors. There are options for population groups with special dietary needs (flavors with Stevia plant-based sweetener), as well as fresh fruit juices, smoothies and coffees. This exciting menu is offered in a chain of modern sophisticated stores.

Chillbox is now ready to bring its savory creations, including Greek strained yogurt offers, to the United States. The company is preparing to open its first full-service Greek frozen yogurt store in the New York Metropolitan area in the summer of 2014.

LYMEL executives are currently searching for franchisees and franchise area developers who would be interested in growing with us across the U.S. with a healthy and world-class product.

You can also visit http://www.chillboxusa.com/.

*/CORRECTION/*
EDITORIAL NOTE: this press release replaces and supersedes a similar release issued on March 5, 2014, titled “ChillboxUSA, the Original and All Natural Greek Yogurt Company Is Coming to the United States from Athens” which contained several inadvertent errors, specifically incorrect presentation of brand name/trademark as “ChillboxUSA” vs simply “Chillbox.” This version should replace prior news item where possible. 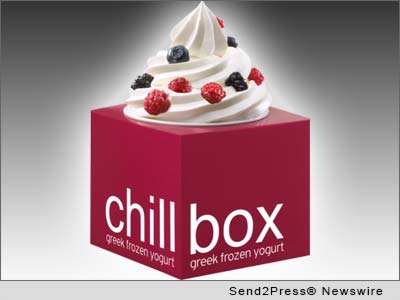 NEWS ARCHIVE NOTE: this archival news content, issued by the news source via Send2Press Newswire, was originally located in the Send2Press® 2004-2015 2.0 news platform and has been permanently converted/moved (and redirected) into our 3.0 platform. Also note the story “reads” counter (bottom of page) does not include any data prior to Oct. 30, 2016. This press release was originally published/issued: Fri, 07 Mar 2014 14:38:14 +0000

ABOUT THE NEWS SOURCE:
Chillbox SA

LEGAL NOTICE AND TERMS OF USE: The content of the above press release was provided by the “news source” Chillbox SA or authorized agency, who is solely responsible for its accuracy. Send2Press® is the originating wire service for this story and content is Copr. © Chillbox SA with newswire version Copr. © 2014 Send2Press (a service of Neotrope). All trademarks acknowledged. Information is believed accurate, as provided by news source or authorized agency, however is not guaranteed, and you assume all risk for use of any information found herein/hereupon.