Circus of the Heart: 2D and 3D Converge on the Production of the Largest Contemporary Circus Photo Collection Ever

At the LA Circus “back lot,” where the TV series “Carnivale” and the film “Water for Elephants” were shot, Schoenfeld brings 150 actors, extras and professional circus performers together, including Tai the smartest Elephant in the world and World Figure Skating Champion and Olympian, Tai Babilonia.

Shot in Schoenfeld’s “Tableaux Vivant” style, “Circus of the Heart” represents the third in his Icons/Iconoclasts series of circus photographic exhibits. Since 2007 the series has exhibited in U.S. and European museums and Festivals. Parts of the series are also included in “Cirque du Soleil’s” private collection and have been seen audiences worldwide.

“Circus of the Heart” will include a 3D film crew who will be capturing Stereoscopic footage for a future project Schoenfeld is producing, a 3D television pilot called “Sawdust.”

Would you be the one who will get the chance to be on this major production? 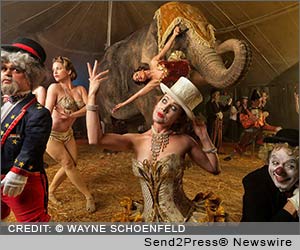 Alternate Headline: Photographer Wayne Schoenfeld returns to the big top in ‘Circus of the Heart’ concluding his Icons-Iconoclasts circus trilogy

NEWS ARCHIVE NOTE: this archival news content, issued by the news source via Send2Press Newswire, was originally located in the Send2Press® 2004-2015 2.0 news platform and has been permanently converted/moved (and redirected) into our 3.0 platform. Also note the story “reads” counter (bottom of page) does not include any data prior to Oct. 30, 2016. This press release was originally published/issued: Tue, 26 Feb 2013 13:30:28 +0000

ABOUT THE NEWS SOURCE:
Wayne Schoenfeld

LEGAL NOTICE AND TERMS OF USE: The content of the above press release was provided by the “news source” Wayne Schoenfeld or authorized agency, who is solely responsible for its accuracy. Send2Press® is the originating wire service for this story and content is Copr. © Wayne Schoenfeld with newswire version Copr. © 2013 Send2Press (a service of Neotrope). All trademarks acknowledged. Information is believed accurate, as provided by news source or authorized agency, however is not guaranteed, and you assume all risk for use of any information found herein/hereupon.