“It’s really happy to bring out wonderful apps on CNET. The upgraded Leawo Video Converter Ultimate is no doubt a wonderful and practical one. It’s a pleasure to see its first appearance towards the world through our platform. The new Blu-ray solutions included indeed offer high quality Blu-ray movie converting and burning and bring great convenience for HD movie watching,” said Scott, a senior editor of CNET.

CNET has been cooperating with Leawo Software for a long time, and gets quite a few of Leawo’s apps for its visitors; like Blu-ray Player, Blu-ray Copy, Free Video Converter, etc. Leawo Video Converter Ultimate is a total media converter suite that provides easy to use, effective and cost-saving solutions between online videos, video, audio, DVD and as well as the newly added Blu-ray conversions. It could convert video/DVD/audio files, burn video to DVD, download online videos, etc. Over 180 video and audio formats and almost all media players and portable devices in the market are supported.

It should be noted that people could only purchase 1-Year license at $19.95 on CNET on Dec. 18, but Leawo website prolongs the special prices of both 1-Year license and Life-time license to Dec. 26, 2014. 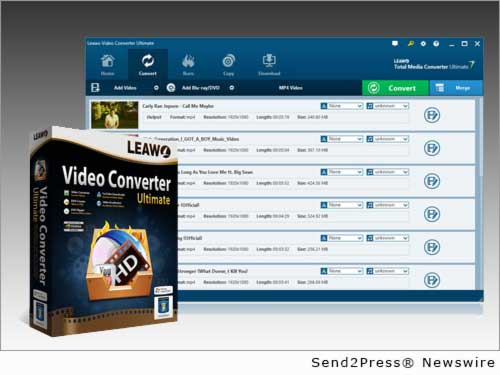 NEWS ARCHIVE NOTE: this archival news content, issued by the news source via Send2Press Newswire, was originally located in the Send2Press® 2004-2015 2.0 news platform and has been permanently converted/moved (and redirected) into our 3.0 platform. Also note the story “reads” counter (bottom of page) does not include any data prior to Oct. 30, 2016. This press release was originally published/issued: Fri, 19 Dec 2014 13:39:27 +0000

ABOUT THE NEWS SOURCE:
Leawo Software

LEGAL NOTICE AND TERMS OF USE: The content of the above press release was provided by the “news source” Leawo Software or authorized agency, who is solely responsible for its accuracy. Send2Press® is the originating wire service for this story and content is Copr. © Leawo Software with newswire version Copr. © 2014 Send2Press (a service of Neotrope). All trademarks acknowledged. Information is believed accurate, as provided by news source or authorized agency, however is not guaranteed, and you assume all risk for use of any information found herein/hereupon.