"Ron Chepesiuk is to true crime books what Nas is to the hip-hop world," offers Seth Ferranti author of "Gorilla Convict: The Prison Writings of Seth Ferranti," who provides the gripping foreword for the book. "He writes like a lyrical poet examining issues in popular culture in both a historical and scholastic context."

It was July 2, 1973, when Frank Matthews, history’s first African American drug kingpin, jumped bail in New York City with $15 to $20 million – the equivalent of $80 million to $90 million in today’s money. It is believed he took his beautiful mistress, Cheryl Brown with him.

Interestingly, though Matthews is undisputedly the longest missing fugitive in DEA history, another figure from the ’70’s, Assata Shakur, just recently made headlines by being placed on the FBI’s Most Wanted Terrorists list. A 66-year old Black woman, Shakur’s reward is set for two million dollars. The reward for 69-year old Frank Matthews, the target of one of the largest manhunts in U.S. law enforcement history, is a mere $20,000. He remains at large and his disappearance is a complete mystery. He has never made any “Most Wanted” list.

Many believe Shakur was erroneously convicted for the murder of a state trooper. But there is no mistaking the fact that the narcotics Matthews helped funnel into African American communities across America continues to leave a trail of devastation, betrayal, death and despair. In each case it has been forty years. And so goes the continued urban legend of Frank Matthews, perhaps the most authentic American Gangster of them all.

Matthews’ literally dominated the heroin market in the ’70’s. A country boy from North Carolina, Matthew operated out of New York with a drug empire that spanned 21 states with overseas contacts for heroin and cocaine. A boss of bosses, the DEA ranks him as one of the Top Ten drug traffickers in United States history. A young man in his twenties at the time, Matthews was one of the first major independents who challenged the La Cosa Nostra for supremacy in the criminal underworld. The streets deemed him, “Black Caesar” as he was the first Black man bold, astute and confident enough to control an interstate organization of its size, independent of the Mob that ruled all.

Chepesiuk follows the trail left cold, retracing Matthew’s criminal path with the nose of a bloodhound. His interviews with DEA agents, Federal Marshals, aging ex-drug kingpins, friends, families and associates are perhaps the most in-depth gathering of details about this nefariously historic figure ever compiled. The book explores a host of nagging questions. How was Matthews able to operate for several years without being detected? What was his relationship with La Cosa Nostra? Why did the CIA get involved in the Matthews investigation? What happened to Cheryl Brown? Why has the mystery of his disappearance been so difficult to solve? And while the questions are explored and answered, “Black Caesar: The Rise and Disappearance of Frank Matthews, Kingpin” colorfully captures the vivid imagery, drama and intrigue of the era, entangling the reader in a real life thriller.

“Ron Chepesiuk is to true crime books what Nas is to the hip-hop world,” offers Seth Ferranti author of “Gorilla Convict: The Prison Writings of Seth Ferranti,” who provides the gripping foreword for the book. “He writes like a lyrical poet examining issues in popular culture in both a historical and scholastic context.”

A two-time Fulbright Scholar, film producer and author of several true crime books, including “Drug Lords,” “Sergeant Smack” and “Queenpins,” Ron Chepesiuk ( www.ronchepesiuk.com ) is also a consultant to the History Channel’s “Gangland” documentary series and the executive producer and co-host of popular radio show “Crime Beat” ( http://www.artistfirst.com/crimebeat.htm ). An authoritative crime historian, Chepesiuk is a native of Thunder Bay, Canada currently based in South Carolina. He brings a wealth of insight and observation to the account of the missing Frank Matthews. He has also written a screenplay based on the Frank Matthews story.

Dead or alive, we may never know the ultimate truth about Matthews, but thanks to Chepesiuk, every speculation in between is resolved in “Black Caesar: The Rise and Disappearance of Frank Matthews, Kingpin.” The FBI may be targeting Assata Shakur, but Frank Matthews is the true gangster Most Wanted!

Chepesiuk will be conducting a two-month blog tour this coming July and August via Partners in Crime Tours ( http://www.partnersincrimetours.net/) . Follow Ron Chepesiuk at www.ronchepesiuk.com . 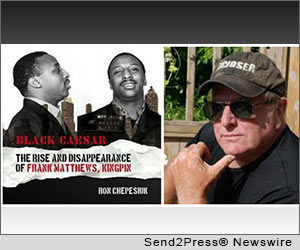 NEWS ARCHIVE NOTE: this archival news content, issued by the news source via Send2Press Newswire, was originally located in the Send2Press® 2004-2015 2.0 news platform and has been permanently converted/moved (and redirected) into our 3.0 platform. Also note the story “reads” counter (bottom of page) does not include any data prior to Oct. 30, 2016. This press release was originally published/issued: Tue, 04 Jun 2013 16:26:44 +0000

View More African American Interest News
"Ron Chepesiuk is to true crime books what Nas is to the hip-hop world," offers Seth Ferranti author of "Gorilla Convict: The Prison Writings of Seth Ferranti," who provides the gripping foreword for the book. "He writes like a lyrical poet examining issues in popular culture in both a historical and scholastic context."

ABOUT THE NEWS SOURCE:
Ron Chepesiuk

LEGAL NOTICE AND TERMS OF USE: The content of the above press release was provided by the “news source” Ron Chepesiuk or authorized agency, who is solely responsible for its accuracy. Send2Press® is the originating wire service for this story and content is Copr. © Ron Chepesiuk with newswire version Copr. © 2013 Send2Press (a service of Neotrope). All trademarks acknowledged. Information is believed accurate, as provided by news source or authorized agency, however is not guaranteed, and you assume all risk for use of any information found herein/hereupon.