"We thought a reality show that depicted a behind-the-scenes view of what it's like for our crew to clean up after some of the most vile and heinous crime scenes would make for some great reality TV," says Constantine Chutis, marketing and media manager, Bio Recovery.

RONKONKOMA, N.Y., Aug. 27, 2015 (SEND2PRESS NEWSWIRE) — Bio Recovery, one of the nation’s leading crime scene cleanup companies, granted access to a local film/TV producer who recently submitted a sizzle reel to the 360-Degree Unscripted Development Pipeline, an A&E Network, that seeks new talent for its television show pipeline. They are excited to announce that they are a finalist.

“We thought a reality show that depicted a behind-the-scenes view of what it’s like for our crew to clean up after some of the most vile and heinous crime scenes would make for some great reality TV,” Constantine Chutis, marketing and media manager, Bio Recovery says. “While it’s a field that can be pretty dark at times, we are hoping to reveal the lighter side – there really is one.”

Roy Spitzer, a chief foreman, says “Every day that I go to work is the worst day of our client’s lives. I need to always keep that in mind.”

The show’s title was pitched as: “Crime Scene Cleanup: In the business of death.” And the Bio Recovery crew is confident that this will make for some groundbreaking television.

All finalists in the 360-Degree Unscripted Development Pipeline will receive designation as a 2015 New York Television Festival (NYTVF) Official Artist and an exclusive invitation to participate in the 11th annual NYTVF held in New York City in October.

For specific details about the film festival and its finalists, visit: http://nytvf.com/2015_pipeline.html.

About Bio Recovery:
In business for more than 15 years, Bio Recovery is a full service biohazard removal company that started in New York, but has expanded its expert crime scene cleanup services to all 50 states.

About New York Television Festival (NYTVF):
Founded in 2005, the NYTVF is a pioneer of the independent television movement, connecting its community of artists with leading networks, studios, agencies, production companies and brands.

Year-round submission opportunities for TV and digital development culminate at the annual NYTVF, the largest television festival in the U.S., each fall. It unites indie creators, industry decision-makers and TV fans alike.

* Photo for media: Send2Press.com/wire/images/15-0826-bio-recovery-300dpi.jpg
* Caption: The Crew, Crime Scene Cleanup: In the business of death. 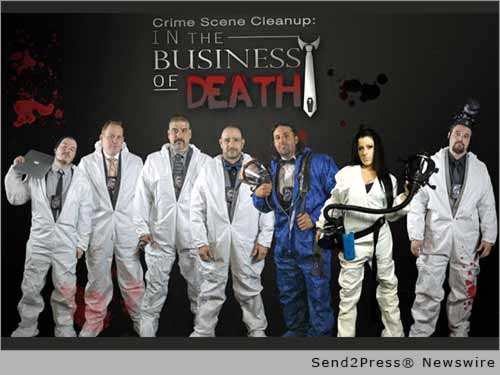 NEWS ARCHIVE NOTE: this archival news content, issued by the news source via Send2Press Newswire, was originally located in the Send2Press® 2004-2015 2.0 news platform and has been permanently converted/moved (and redirected) into our 3.0 platform. Also note the story “reads” counter (bottom of page) does not include any data prior to Oct. 30, 2016. This press release was originally published/issued: Thu, 27 Aug 2015 17:30:00 +0000

View More Awards and Honors News
"We thought a reality show that depicted a behind-the-scenes view of what it's like for our crew to clean up after some of the most vile and heinous crime scenes would make for some great reality TV," says Constantine Chutis, marketing and media manager, Bio Recovery.

ABOUT THE NEWS SOURCE:
Bio Recovery

LEGAL NOTICE AND TERMS OF USE: The content of the above press release was provided by the “news source” Bio Recovery or authorized agency, who is solely responsible for its accuracy. Send2Press® is the originating wire service for this story and content is Copr. © Bio Recovery with newswire version Copr. © 2015 Send2Press (a service of Neotrope). All trademarks acknowledged. Information is believed accurate, as provided by news source or authorized agency, however is not guaranteed, and you assume all risk for use of any information found herein/hereupon.